Last week Donald Trump’s mouth erupted in yet another outburst of hate and misogyny. While attempting to disparage Hillary Clinton for losing to President Obama in the 2008 Democratic primary, Trump said that “she got schlonged.” He was immediately, and deservedly, repudiated by decent people from all points on the political spectrum. 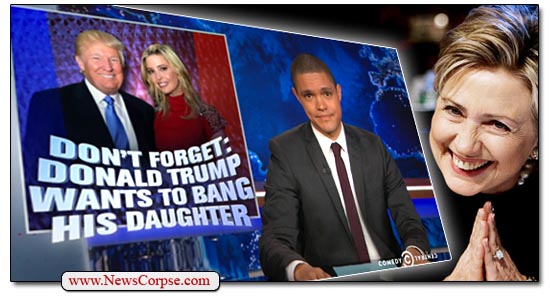 However, consistent with his tendency to burrow in deeper after making an ass of himself, Trump refused to concede that his language was sexist or vulgar. He insisted that the word simply meant “beaten badly,” a definition that exists nowhere in reality. This is a favorite tactic of his. A few weeks ago he insulted Carly Fiorina by pointing at her on TV and saying “Look at that face! Would anyone vote for that?” He responded to the criticism that resulted with the desperate and dishonest explanation that he was talking about her “persona.” Yeah, right.

Trump just likes to redefine words after they get him into trouble. And he doesn’t even do it very well, because everyone knows he’s lying. Since this most recent vulgarity Trump has defended his use of the word by saying that it is “often used” in politics. And he helpfully provided an example from an NPR reporter over thirty years ago. He must also have his own definition of the word “often.”

There is also the matter of Trump’s hypocrisy. In September, following a GOP debate, National Review editor and Fox News contributor Rich Lowry said that Carly Fiorina had schlonged Trump in the debate (actually he said that Fiorina “cut his balls off,” but the message is the same). This shocked Trump’s tender sensitivities and he demanded an apology and called for Lowry to be taken off the air and fined by the FCC. That’s just more evidence that he can dish it out, but crybaby Trump simply can’t take it.

For her part, Clinton gave a composed but forthright response to Trump’s offensive remarks, including his surprise and disgust that she, like all other humans, occasionally visits the restroom. She said that…

“I really deplore the tone of his campaign, the inflammatory rhetoric that he is using to divide people, and his going after groups of people with hateful, incendiary rhetoric. Nothing really surprises me anymore. I don’t know that he has any boundaries at all. His bigotry, his bluster, his bullying have become his campaign. And he has to keep sort of upping the stakes and going even further.”

Not wanting to be “vagina’ed,” Trump shot back at Clinton in a couple of threatening tweets. The first warned her to “Be careful Hillary as you play the war on women or women being degraded card.” The second similarly snarled “Hillary, when you complain about ‘a penchant for sexism,’ who are you referring to. I have great respect for women. BE CAREFUL!”

Or what? Trump’s threat, as affirmed later by his campaign spokesperson, was aimed at Clinton’s relationship with her husband, Bill. Apparently Trump thinks that by recalling the infidelities of the former President, it will reflect badly on her. However, there are a few problems with that strategy. First, the public doesn’t blame Hillary for the transgressions of her husband and raising the issue is more likely to inspire sympathy than wrath. Secondly, the Clintons managed to restore and maintain their marriage during one of the most difficult periods that any marriage could suffer. That ought to be regarded as a real demonstration of family values and respect for the commitments of matrimony.

Finally, if it’s a war on family values that Trump is itching for, he may be leaving his rear flank exposed (sorry for that inadvertent visual). After all, Trump is a serial adulterer. He is on his third marriage and the public record of his cheating ways is well documented. Here is a man who has broken two marriage vows (so far) while flaunting his flings in the faces of his then-wives. Hillary Clinton, of course, has done none of that.

Trump is demonstrating that he has no friggin’ idea what constitutes women’s issues. He is reducing it to the bad behavior of an individual. However, it must be noted that Bill Clinton supports a woman’s right to choose, equal pay, prohibiting discrimination based on gender, support for victims of abuse, and family leave and child care. Those are actual women’s issues, not some guy being a horndog, and Donald Trump opposes them all – and is also a horndog.

Trump’s values are written as he goes along to allow him whatever perverted privileges he desires. And despite his recent and transparently phony piety, he holds nothing sacred. When asked directly if he had ever asked God for forgiveness, he said “Why do I have to ask for forgiveness if you’re not making mistakes?” [See The Immaculate Birther]

It’s that sort of pathological narcissism that produces Trump’s raging hate-speech. He has already viciously demeaned Latinos, African-American, Muslims, veterans, and the disabled. And through it all his blatant misogyny has never been far from the surface. As Fox News anchor Megyn Kelly noted, Trump has called women “fat pigs,” “slobs,” and “disgusting animals.” For that Kelly herself became the victim of Trump’s tweets, attacking her personally, professionally, and even calling her a “bimbo.”

In closing, if Trump really thinks that he can threaten Clinton on the basis of family values, he better be ready to respond to the numerous accounts of his carnal lust for his own daughter, Ivanka. This grotesque revelation, that he has made repeatedly and publicly, should put to rest the question of which candidate is more respectful of women and morality. So bring it on Donny. But don’t be surprised to keep seeing this video from the Daily Show popping up: