In an interview with CNN’s Chris Cuomo, Bernie Sanders made some salient points with regard to the unprecedented amount of coverage that the media has given to Donald Trump since he announced his campaign for the GOP nomination for president. 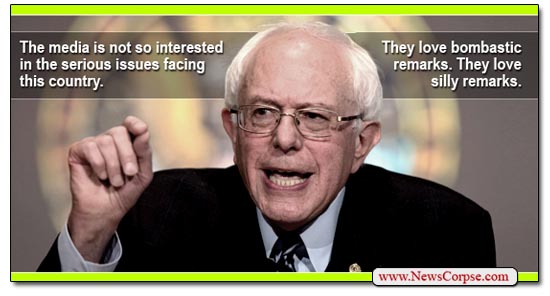 Cuomo set up the issue by asking Sanders about the media role in the campaign and Donald Trump’s success saying “His popularity is inarguable. How he is becoming popular is the source of a lot of argument and criticism. […] Why is it working so well for him?” That’s an odd question for Cuomo to ask Sanders, but it resulted in this exchange (video below) with Sanders placing the onus where it belongs:

Sanders: Well Chris, You’re gonna have to ask the media precisely why. Trump is a smart guy. He’s a media guy. He had a TV show. I’ll give you one example. A recent study showed on ABC evening news, Trump over a period of time got 81 minutes of time. Bernie Sanders got 20 seconds. Now you tell me why. And I think it has to do with the fact that Trump is very smart. He knows that media is not so interested in the serious issues facing this country. They love bombastic remarks. They love silly remarks […] I think this is more of an indictment of the media actually than it is of Trump.
Cuomo: I don’t see it. Do we cover him more? Yes. Why? He’s number one in the polls. He’s highly relevant. He drives the discussion.
Sanders: But Chris, explain to me how he becomes number one. He boasts of the fact…He says, ‘I don’t even have to pay for commercials. The media’s going to put me on all of the time.'”

Cuomo continues to insist that the media plays no role in Trump’s dominance of the media. Clearly that’s an unsupportable position. The press was covering every Trump event from beginning to end from the day he entered the race. They would interrupt programming to broadcast his stump speeches live. And they weren’t doing it because of his popularity. They were doing it because of his proclivity for disgorging shocking and offensive rhetoric that would drive, not the discussion, but ratings. If it were solely because he was leading in the polls, then why weren’t they doing the same thing for Hillary Clinton, who has also been leading in the polls? Or for Sanders who has been breaking fundraising records set by President Obama in 2008?

Sanders was correct in stating that Trump boasts about the media putting him on all the time. Last August Trump even made it a key point in his speech to a crowd in Alabama saying sarcastically…

“Every time I go on television it’s gotta be live. It’s live. I said ‘Oh, can I have a rest please?’ […] How come it always has to be live? Why don’t they just cover me like anybody else where they go the next day and they show little clips? Every time I speak it has to be live. It’s ridiculous, but it’s OK. Right? We have to suffer with it.”

If Trump recognizes that it’s ridiculous, why doesn’t the media? And even after he taunts them about how tightly they are wound around his fat finger, they persist in following him around like lovesick puppies, even though there is nothing in his speeches that makes them the least bit newsworthy. Trump sees it but Cuomo doesn’t? He would have to be pasting quarters to his eyes and wrapping his head with duct tape.

This exchange is emblematic of the problem that the media has assessing its own shortcomings. Sanders spells out the blatant bias, provides a specific example of it, and CNN’s anchor remains oblivious and defensive. It’s also notable that the example was for ABC News rather than Fox News where Trump’s partisan omnipresence is expected.

Cuomo never responds directly to the example Sanders gave about the 81:1 coverage ratio that was documented by the respected television analyst, the Tyndall Report. Then the discussion just drifted off into other subjects, insuring that the disparity will very likely continue for the remainder of the campaign. And the media will continue to be blind to their failures.