You know that a news organization has completely given up on the practice of journalism when they sink to dishonest (and hilarious) levels as low as this: 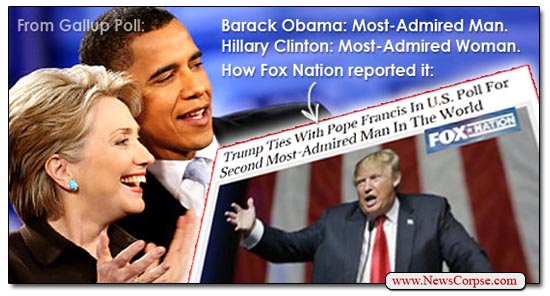 This is the actual headline of a featured article on the Fox News community website, Fox Nation: “Trump Ties With Pope Francis In U.S. Poll For Second Most-Admired Man In The World.” Now some readers might wonder what happened to the first most-admired man. But not Fox News readers. They are perfectly happy stuffing their thick craniums with incidental information that satisfies their lust for pre-chewed wingnutisms and promises to keep them blissfully ignorant.

For the rest of the world it was President Obama whom the poll found was the most-admired man in the world. This was his eighth time to be honored as such, and he achieved this ranking with more than three times the support that Trump received for his second/third place tie with the Pope.

For Fox News to report the findings of a poll by omitting the winner and announcing an also-ran in the headline is representative of their aversion to honest journalism. It is reminiscent of the 2012 presidential campaign when Fox ignored their own polls that showed Obama beating Mitt Romney, and instead reported other polls with Romney in the lead that turned out to be wrong. Indeed, Fox spent much of that campaign “unskewing” the polls to artificially produce a Romney lead.

Also buried by the Fox Nationalists was the news that Hillary Clinton was named the most-admired woman in the world for a record twentieth time. This is a particularly notable feat considering the rampant negative treatment she has gotten in the press that has been badgering her over everything from Benghazi to her email account. Certainly Fox has an incentive to suppress the fact that Clinton is widely admired as she seeks to become the next president of the United States.

The brazenly biased reporting by Fox News here exposes their pitiful desperation to shape a false narrative. It would not be dissimilar to posting a celebratory headline after the 2012 campaign that boasts “Romney Finishes Second In Presidential Election.” They could have just left out that Obama won and let their dimwitted audience dance around in utter ignorance. It’s a dance they know very well, and for which they will once again be choosing partners as the 2016 campaign unfolds. This should be fun.