Last night’s debate on CBS showcased a Republican Party that is jam-packed with whimpering, infantile candidates who are wholly unprepared to dress their dollies, much less lead a nation. It’s hard to imagine that, after watching that spectacle, anyone can picture any of these colicky brats with America’s nuclear missile launch codes. 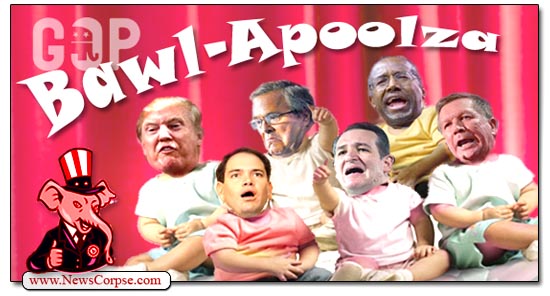 If you have a strong stomach you can go watch the whole debate on YouTube, but what will be presented here is a representative sampling of the frightening stupidity that is exhibited by what the GOP believes are its shining lights – the banner carriers of their Party’s mission. These examples are not snippets of the policy or vision that the candidates are pitching. For the most part they simply repeated the same old right-wing claptrap that they have been spewing for years. What you will see here is more of a demonstration of how dysfunctional their underdeveloped brains are, and how useless they would be in a crisis. In reverse order…

Carson was asked this question about the President’s responsibilities in the event of a Supreme Court vacancy: “You’ve written a book on the constitution recently. What does the constitution say about whose duty it is here to act in this kind of a situation?” Carson’s response was…

“Well, the current constitution actually doesn’t address that particular situation, but the fact of the matter is the Supreme Court, obviously, is a very important part of our governmental system.”

Actually, the fact of the matter is that the Constitution explicitly addresses this particular situation. It says that the President “shall have Power, by and with the Advice and Consent of the Senate,” to nominate Judges of the supreme Court. There is nothing ambiguous about this granting of executive authority. Now, it’s pretty dumb to not understand something as basic as this, but Carson compounded his idiocy by making an unrelated observation:

“And, when our constitution was put in place, the average age of death was under 50, and therefore the whole concept of lifetime appointments for Supreme Court judges, and federal judges was not considered to be a big deal.”

OK, there are actually some good reasons to revisit the lifetime appointments clause of the Constitution, but Carson’s ramblings don’t mention any of them. A quick glance at the history books informs us that the first Supreme Court justices did not have some sort of neanderthal lifespan that made such an appointment reasonable. The first Court’s members, and their ages on death, were Chief Justice, John Jay (83) and Associate Justices: William Cushing (78), John Blair (69), John Rutledge (60), James Wilson (55), and James Iredell (48). So two of the four passed away fairly young, but the rest were pretty hardy. Judge Jay outlived Antonin Scalia by four years. This lapse of easily obtainable knowledge is not surprising for someone who rejects evolution and thinks that the pyramids in Egypt were built to store grain.

During an argument about the record of former President George W. Bush, Donald Trump laid responsibility for 9/11 at Jeb’s brother’s feet. That’s actually a fair criticism, even though Trump lied about his opposition to the Iraq war that followed. But Rubio defended Bush by shouting defiantly that “The World Trade Center came down because Bill Clinton didn’t kill Osama bin Laden when he had the chance to kill him.”

Actually, Bill Clinton did take actions against Bin Laden that were unsuccessful. And for his trouble he was bitterly castigated by Republicans in Congress who cooked up a conspiracy theory that Clinton was using the attacks as a distraction. What’s more, Bush was unable to capture or kill Bin Laden after nearly eight years and with the full force of a military wartime engagement, including tens of thousands of soldiers in Afghanistan. In light of that, it seems rather absurd to complain that Clinton didn’t succeed when he did not have Congress’ authorization for war and Bin Laden had not proven to be a significant threat to the U.S. at the time. Rubio’s assertion was merely a lame attempt to lash out a Democrat in order to absolve his hero, Bush, of responsibility.

Is anyone shocked that Trump took the gold in this competition of idiocy? He could have done it easily by sticking to his standard toolkit of lies (see the Trump Bullshitopedia), many of which he used in this debate. For instance, he claimed that he didn’t support Planned Parenthood, that he didn’t file for bankruptcy (4 times), that he didn’t use eminent domain to try to evict an elderly woman for his casino parking lot, and that he opposed the Iraq war “loud and strong.” All lies.

But Trump served up this morsel of nitwittedness during an exchange about his use of profanity. In his own defense he sought to attack Jeb Bush saying…

“Two days ago he said he would take his pants off and moon everybody, and that’s fine. Nobody reports that.”

First of all, Trump is completely misrepresenting what Bush said. Bush was making a rhetorical point about how hard it is for him to get the attention of the press. The “mooning” comment was just a joking example of what he might have to do. And he said it to a reporter. Trump implied that Bush was making a literal threat to expose himself.

Now that was pretty dumb all by itself, and it certainly didn’t excuse Trump’s much more blatant obscenities. But Trump wasn’t through. After Bush denied Trump’s charge, Trump insisted that “You did say it. Been reported in 10 different news…” Well, if it was reported 10 times, then how does Trump explain his initial charge that “Nobody reports that?” In the span of a few seconds, Trump managed to expose himself as a liar.

If this is representative of the best that the Republican Party has to offer, it is a party that is in deep trouble. The rest of the field may not have made this list, but they are no less deserving. Ted Cruz is becoming the Nixon of the Tea Party set with his dirty campaign tricks. Jeb Bush doesn’t seem to have any reason for running other than that his father and brother did before him. And John Kasich thinks he can sell his “moderate” appeal to Republicans who have fallen off the deep end of the John Birch Society pier. And all of them acted as if they hadn’t reached puberty yet. I don’t know about you, but I can’t wait for November.