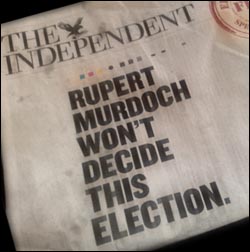 Much of the media is already predicting a GOP takeover of the House of Representatives. They blast sensationalist headlines that declare a coming Apocalypse for Democrats. This view is being presented as if it is a foregone conclusion.

But there are reasons to suspect their confidence. Polling is notoriously dicey for midterm elections. The Tea Party has certainly fired up a segment of the Republican base, but it is doing the same for Democrats. The youth vote is being significantly under-represented in polling (most pollsters don’t even call cellphones). And the most potent force on the left, “Getting Out The Vote,” may turn expectations on their head as unions, African-Americans, Latinos, seniors, and other progressive constituencies mobilize their members.

Robert Creamer has authored an inspiring story to motivate voters and increase participation in GOTV efforts. Below are some choice excerpts and links to ways you can help.

The Democratic Path to Victory in the House
[T]o beat the odds and win, Democrats must be successful at four key tasks over the next five days.

1). Democrats and their allies must be successful at turning out larger than expected numbers of Latino voters. Polls show Latino voters breaking 65% to 70% Democratic, but their turnout in most Mid-terms falls well below both non-Hispanic white and non-Hispanic black voters.

2). Democrats need to successfully assure that two key issues are on the minds of the voters at the close of the race: Social Security, and outsourcing jobs.

3). In many districts it is especially important that Democrats are successful in emphasizing the strong personal relationship of voters – especially older voters – with their Member of Congress. And they must also be successful at disqualifying the alternative.

4). First and foremost, for Democrats to beat the odds next Tuesday, our get out the vote operations must function flawlessly. Basically, these operations must defy the “likely voter” models that have dictated the gloomy scenario in most polls.

Wednesday morning, don’t say to yourself, “wow, we only lost the House by one seat – and only by a few votes – and I could have changed that.”

There is a pathway for Democratic victory, but it requires we hit on all four of these key cylinders. Too much is at stake to allow any stone to remain unturned. Pick up the phone as soon as you finish reading this. We have five days to change history.

Good advice. Creamer lays out details for each of the points above that are important to know and to relay to your friends and family. The value of your participation in GOTV is incalculable. And it increases exponentially for everyone you persuade to join you.

Don’t let the media decide this election. Don’t let Rupert Murdoch and Fox News get away with installing a far-right cadre of some of the most dangerously demented candidates in history. If we prevail the Tea Party will be over. They can call it a day. And that alone would make the effort worthwhile.

3 thoughts on “The Democratic Path To Victory In The House”