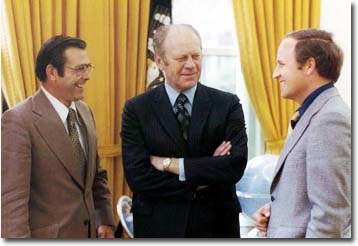 The passing of former President Gerald Ford will produce a torrent of retrospectives and remembrances. The media will undoubtedly focus on the Nixon resignation, the end of our “long national nightmare,” and the pardons that probably cost Ford the election in 1976. But there is a lesser known story that may have an even longer reach. It’s a story that touches on some of the core values of our liberties and introduces us to a cast of characters that remain on stage today.

The original version of the Freedom of Information Act (FOIA) of 1966 was a controversial document that prevailed despite some bitter debates and opposition by President Johnson. As Johnson’s press secretary, Bill Moyers, describes it:

“LBJ had to be dragged kicking and screaming to the signing ceremony. He hated the very idea of the Freedom of Information Act; hated the thought of journalists rummaging in government closets; hated them challenging the official view of reality. He dug in his heels and even threatened to pocket veto the bill after it reached the White House.”

This was not an uncommon point of view for presidents, who are generally protective of their executive privileges. Nonetheless, Johnson signed the bill, but its form at the time made it nearly impotent.

Congress endeavored to shore up FOIA and produced legislation to amend it in 1974. The bill was dumped in Ford’s lap at the commencement of his promotion to the White House. Ford’s position on the new bill was that it was negative on its merits but could be problematic to veto in the wake of his ascension to the presidency. He had promised open and honest government, and vetoing a Freedom of Information Act might not be viewed as consistent with either openness or honesty.

Ford eventually was persuaded to veto the bill with the help of a trio of advisors: his Chief of Staff, Donald Rumsfeld; his deputy Chief of Staff, Dick Cheney; and the head of the Justice Department’s Office of Legal Counsel, Antonin Scalia. An ominous early assemblage of an evil cabal we know only too well today.

The veto was overridden by Congress and the amendments became law. In the intervening years it has proven to be an invaluable tool to rein in the kind of government arrogance and abuse that is exemplified so well by the Nixon era that preceded its passage.

It’s just too bad that the people responsible for the veto could not also have been overridden so that today we would not have to be suffering still from their destructive, self-serving, and hostile policies. Thousands of American families, and hundreds of thousands in Iraq, have paid dearly for their misguidance. We should keep those families in our thoughts and prayers, today and going forward, just as we do the Ford family.