The American media obsession with hair-raising tabloid journalism is responsible for lowering the political IQ of the nation. As an example, the wholly manufactured debate over voter fraud keeps popping up whenever there is a lull in stories about Hillary Clinton murdering U.S. ambassadors or if Donald Trump goes a couple of hours without saying something pitifully stupid.

Yesterday at the Fox News community website, Fox Nation, they linked to a story from the National Review that once again raised allegations of non-existent illegal voters invading polling places across the nation. This zombie myth has been debunked repeatedly but continues to surface in the conservative press that doesn’t have anything better to do than lie about fearsome minorities plotting to steal America away from its rightful, white Christianist owners. The headline blared that “The Obama Administration Wants To Make Sure Non-Citizens Vote In The Upcoming Election.” 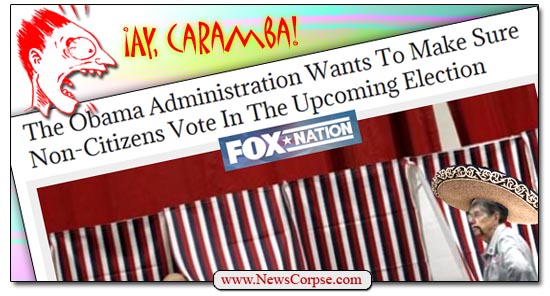 This goes somewhat beyond the run of the mill dishonesty where they merely complain that President Obama opposes unnecessary voter ID laws. In this article, by long-time voting fraud alarmist Hans von Spakovsky, the President is accused of wanting to “make sure” that illegal votes are cast by nefarious foreigners. This would make him an accomplice to the crime. Spakovsky wades into the weeds of arcane legalistic rhetoric containing baseless allegations of conflict of interest from unnamed sources. The crux of his argument centers around a wingnut lawsuit…

“…seeking to reverse a recent decision by the U.S. Election Assistance Commission (EAC). The Commission’s decision allows Kansas and other states, including Arizona and Georgia, to enforce state laws ensuring that only citizens register to vote when they use a federally designed registration form.”

Spakovsky characterizes the dispute as an effort to prevent non-citizens from voting illegally (something that virtually never happens) by imposing identification requirements for prospective registrants. In fact, what the lawsuit aims to achieve is to prevent Democrats from voting. What the article leaves out entirely are the specific requirements proposed in Kansas by their ultra-rightist Secretary of State Kris Kobach and other GOP-led states. The consequences of the policies advocated by Spakovsky and his ilk resulted in some 40,000 voters being removed from the voting rolls in Kansas. They justified this on the basis of having found seven names of undocumented residents on those rolls, none of whom ever cast a vote. And guess who most of those 40,000 disenfranchised voters were: minorities, students, low-income workers, and other Democratic leaning constituents.

In addition to having no documented evidence of voter registration fraud or illegal voting, even after pouring through hundreds of thousands of votes, the voter suppressors themselves were found to be fraudulent. Both Spakovsky and Kobach were called out in a PolitiFact analysis as falsely representing data on illegal voting. This is the sort hypocrisy we are dealing with. And this is something they have been doing for years in an attempt to put up roadblocks for voters they don’t happen to like. Be watchful as November approaches because they aren’t through with this yet.