Last night’s debate on CNN showcased once again that the field of Republicans is jam-packed with whimpering, infantile candidates who are wholly unprepared to lead a bunny hop, much less lead a nation. It’s hard to imagine that, after watching that spectacle, anyone can picture any of these colicky brats with America’s nuclear missile launch codes. 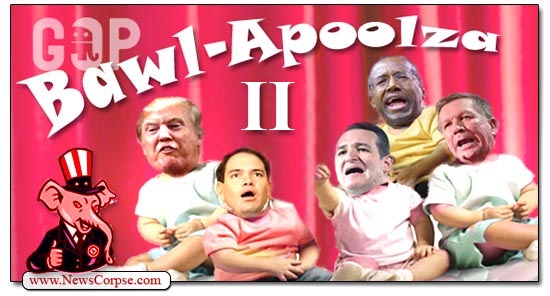 As usual, Donald Trump dominated the brawl with his trademark insults and incessantly repetitive branding (“Make America build a wall of guns for Jesus, losers”). At this point it would probably be easier to list examples of Trump saying something truthful than to enumerate the many outright falsehoods he spews. But it wouldn’t be as much fun. Here are some of the blatant lies, as documented by Factcheck.org, that are contributing to the ever-growing Trump Bullshitopedia:

As an added bonus, here is an item that isn’t technically a lie, but is frighteningly repugnant. At a post-debate rally Trump reminded his cultish followers about how bitterly he hates the media. And then he disclosed what he would do to his enemies in the press given the opportunity:

“One of the things I’m gonna do if I win… I’m going to open up our libel laws so when they write purposely negative and horrible and false articles, we can sue them and win lots of money…With me they’re not protected because I’m not like other people…So we’re going to open up those libel laws, folks, and we’re gonna have people sue you like you’ve never been sued before.”

In other words, Trump intends to repeal the First Amendment and, through his power as president, threaten and attack the press. Thin-skinned crybabies like Trump may not like any negative attention they get, but it is a Constitutional right for the media to have the freedom to express themselves. And like most rightist Republicans, they only revere the Constitution (or the bible) when they can interpret it to coincide with their preconceptions. It is the way cultists operate. See Fox News…