Since it’s inception, Fox News has pursued its mission to advance a far-right political agenda and provide a friendly platform for Republican politicians. They openly disparaged Democrats and promoted fake “scandals” that were often invented in their own editorial meetings. Their pretensions to being “fair and balanced” were quickly revealed to be a cheap facade and, to the extent that they continue to push it, they are mercilessly ridiculed. 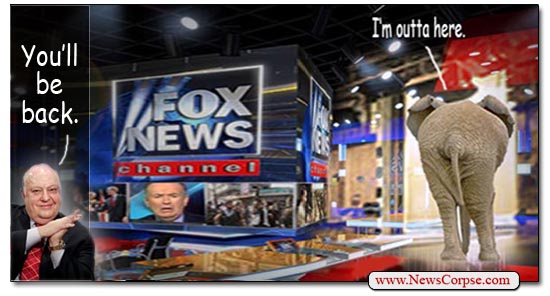 Now, after twenty years of investing in their conservative propaganda machine, it turns out that the core constituency to whom they have been shamelessly pandering has an increasingly negative view of the network. A new YouGov survey of brand buzz shows that Fox News is not at all well thought of by the Teabagger contingent they covet:

“By mid February, FNC’s perception by Republican adults 18 and over had reached its lowest point in more than three years, and has declined by approximately 50% since January of this year.”

The survey places the favorability of Fox News at a mere seventeen (out of 100). And that’s just among Republicans. The ranking for the population at large is actually below zero. YouGov notes that this precipitous decline occurred simultaneously to the emergence of Donald Trump as a leading candidate in the Republican presidential primary.

That should not come as a surprise to anyone who has been paying attention to the long-festering feud between Trump and Fox. He has blasted Fox as being “totally unfair” to him – a delusional complaint considering that they have given him far more airtime than any other candidate, after having created his candidacy in the first place.

Trump engaged in a painfully public quarrel with Fox’s Megyn Kelly who he called a “lightweight” and a “bimbo.” This led to his pledge not to appear on Fox News (which he has since revoked), and a call to boycott the network. Trump later refused to participate in a GOP debate on Fox because he was frightened off by Kelly’s presence as a moderator. His Twitter disciples fell in line with the boycott rhetoric and flooded his feed with promises to turn off Fox. Which, in the end, will be of benefit to everyone.

There is no question that Trump’s war with Fox has bled the network of its once loyal base. The YouGov survey documents a trend that has been in place for at least a couple of years. In 2013 Fox News had completely dropped out of the YouGov BrandIndex’s top ten GOP brands, when the it had been number one in 2012. News Corpse addressed that sinkhole at the time saying that…

“…a lot has taken place that has deteriorated the bonds that Republican viewers had with their daddy network. They lost an election that Fox had assured them they would win in a landslide. They launched numerous investigations into alleged scandals that, despite Fox’s endless hype, failed to catch on with the public or to prove any malfeasance on the part of the president they despise. They pursued a doomed strategy to shut down the government and threaten to throw the nation into default in an effort to reverse time and make ObamaCare disappear. And they continue to suffer through a relationship with the acutely demented Tea Party whose disintegrating appeal hasn’t stopped them from launching pernicious primary challenges that will inevitably benefit Democrats.”

Not much has changed since then. Fox News continues to belch out fringe fabrications and flagrant falsehoods intended to keep their wingnut viewers misinformed. The only real difference is that now they have in Donald Trump a candidate who is articulating their most abhorrent positions out loud.

Where Fox News once tried to disguise their elitist, racist, authoritarian biases and hate-speech with rhetorical dog whistles, Trump uses bullhorns to achieve the same ends. The problem for Fox is that Trump’s diatribes are just as often aimed at them as at the liberals that Fox was created to destroy. And the aftermath may end up being the epitaph of the GOP. So there is some good news after all.