As this wacky election season continues to spiral out of control, the sound of an increasingly impotent Republican Party scratching at the door is becoming ever more noticeable. The so-called establishment candidates are falling to the wayside as a creature manufactured by reality TV lumbers across the GOP landscape, flattening its hopes like cardboard models being trampled by a carrot-topped Godzilla. 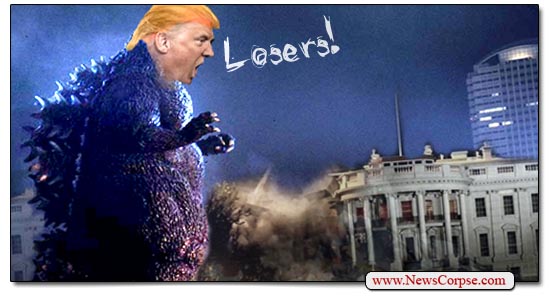 In the frantic chaos that ensues, the Republican National Committee is exhibiting signs of desperation. Party chair Reince Priebus has mounted a backroom campaign to convince everyone that he has everything firmly under control, a claim that has evoked nothing but laughter. Politico is reporting that Priebus is…

“…stating in private meetings that the party has sway over its at times unwelcome front-runner because it has tools Trump will need to use to win a general election — voter data and field, digital and media operations that a nominee typically inherits from the party infrastructure.”

“Dangling access to these resources, Priebus thinks he can help steer Trump toward partywide policy goals and away from the inflammatory rhetoric that Republican officials see as divisive and dangerous.”

Well, that ought scare the savage Trumpzilla into bowing to the supremacy of the party that he has been running against for eight months. The lunacy that Priebus thinks Trump cares about the RNC’s “resources” is almost as absurd as his belief that Trump would ditch his potty-mouth politics, or that he doesn’t already espouse the wingnut policy goals of the party at large. If Trump cared about partnering with the RNC he would not be repeatedly threatening to abandon the party and run as an independent. He wouldn’t be accusing them of distributing illegal solicitations. He wouldn’t be criticizing their debate audiences as being deliberately stacked against him.

Even setting aside the hostility that exists between the RNC and The Donald, the GOP’s services are not exactly state of the art. Last year it was revealed that the Koch brothers were building their own campaign machine that includes many of the services that are typically performed by a political party. The Koch operation was said to be angling to replace the party’s electoral architects by building and distributing the voter access tools and outreach capability.

With the Koch’s running election services and Fox News running PR, you might be wondering what purpose the RNC serves. A lot of political operatives and analysts are wondering the same thing. Under the direction of Priebus the party has become less of a factor than in previous years. It has struggled with Trump’s candidacy from the beginning when his refusal to rule out a third-party run resulted in a loyalty oath that all candidates were required to sign (and which Trump has already hinted he might break). It would be wishful thinking to imagine that Trump would suddenly buckle under to a weakened GOP that’s begging him to play nice.