Seven months ago Donald Trump was a participant in the first Republican primary debate on Fox News. He was treated exactly the same as every other candidate, but his reaction was unique in a way that has come to exemplify his trademark bluster and vulgarity. Since then Trump has engaged in a non-stop assault on Fox News anchor Megyn Kelly, whom he accused of being unfair by asking him to account for his own words. 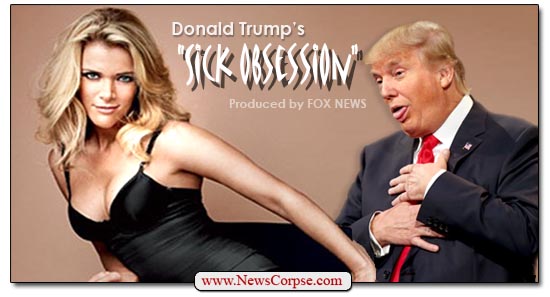 In all the time that has gone by, Fox News barely said a thing about Trump’s contemptuous ranting. Today, however, Fox News appears to have had enough. Their turning point came after Trump posted another in his series of caustic tweets bashing Megyn Kelly. In the past few days he has taken to branding the Fox host as “Crazy Megyn,” belittling her as “highly over-rated,” and calling her program “unwatrchable.” And then he unleashed this direct attack aimed at Kelly and Fox’s most treasured asset, their audience:

“Everybody should boycott the @megynkelly show. Never worth watching. Always a hit on Trump! She is sick, & the most overrated person on tv.”

For some reason, after eight months of acrimony and bile that was an entirely one-sided feud by an irrationally enraged Trump, Fox News decided to fight back. They issued the following statement in a belated defense of their star anchor:

“Donald Trump’s vitriolic attacks against Megyn Kelly and his extreme, sick obsession with her is beneath the dignity of a presidential candidate who wants to occupy the highest office in the land. Megyn is an exemplary journalist and one of the leading anchors in America — we’re extremely proud of her phenomenal work and continue to fully support her throughout every day of Trump’s endless barrage of crude and sexist verbal assaults. As the mother of three young children, with a successful law career and the second highest rated show in cable news, it’s especially deplorable for her to be repeatedly abused just for doing her job.”

For Fox News to finally notice that Donald Trump’s juvenile antics are “beneath the dignity of a presidential candidate” is something of a revelation for them. Apparently slandering all Mexicans as rapists and criminals, mocking a reporter with a physical disability, embracing the support of white supremacists, proposing to ban all Muslims from entering the U.S., encouraging violence at his rallies, repeatedly swearing in public, and most recently floating the idea of his rabid legion of disciples rioting at the Republican convention if he isn’t crowned as the party’s nominee – apparently all of that wasn’t sufficient for Fox to recognize Trump’s total lack of anything resembling dignity. Maybe they were still waiting for him to fulfill his promise to “act presidential.” Good luck with that.

This isn’t the first time that Trump has advocated boycotting Kelly’s show or even the Fox Network completely. And it certainly wasn’t the first time that he had insulted Kelly in the most sexist terms. He has called her a “bimbo” and complained that her demeanor at the GOP debate was due to her menstrual cycle saying that “You could see there was blood coming out of her eyes, blood coming out of her … wherever.” The entirety of his tirades against Kelly seemed to have stemmed from that debate where she questioned him about his proclivity for hurling misogynistic insults at any women who dared to be less than deferential to him. It’s a grudge he has held onto tenaciously despite the fact that she never responded in kind.

So why did Fox suddenly come to Kelly’s aid after eight months of abuse from Trump? One possible reason is his decision to skip the next Fox News GOP debate (for the second time), which resulted in its cancellation. That will cost Fox a small fortune. More likely, though, it’s that Kelly recently complained to More Magazine that “I do wish that O’Reilly had defended me more in his interview with Trump.” She was referring to an episode of the O’Reilly Factor where Trump told O’Reilly that he had “zero respect” for Kelly, and O’Reilly just continued sucking up to Trump without offering any support to his network colleague. Perhaps that complaint filtered up to the executive suites and touched the withered heart of Fox CEO and cult leader Roger Ailes, who sent word down to his PR flacks to start backing her up. He has a lot invested in her and her show, which is the second highest rated program on Fox.

In any case, it’s fun to see Fox News, the media equivalent of the Republican Party Pravda, calling out the Republican’s front-runner for the nomination to run for president, as “crude and sexist” with a “sick obsession.” Does this mean that they will cease to give him millions of dollars more in free airtime (beyond the $30 million they’ve given him so far)? Does it mean they will hold him accountable for the plethora of blatant lies he’s told in his quest to be America’s dictator (see the Trump Bullshitopedia)? Don’t bet on it. Fox is still more concerned with advancing an extreme rightist agenda while raking in piles of cash from advertisers hooked on their ill-gotten ratings. Consequently, this bone they’ve thrown to Kelly will not likely alter the propaganda path they’ve trod for the last twenty years.