It is difficult to recall any leading candidate for president who has so frequently and blatantly insinuated the threat of violence into a political campaign as Donald Trump. And his threats have not been merely hypothetical rhetoric, they have produced actual assaults at his rallies on peaceful protesters and even members of the press. 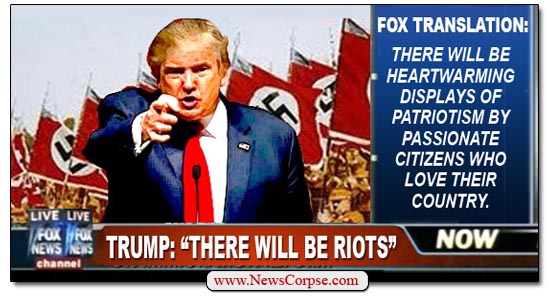 When Trump made recent comments that he expects that there will be riots at the Republican National Convention if he is not given the GOP nomination for president that he believes is his entitlement, he said it in the context of his prior statements that literally encouraged violence from his followers. However, Fox News is trying desperately to absolve him of any responsibility for the potential harm that he is forecasting and inciting. This morning on MediaBuzz with Howard Kurtz, the host went to great extremes to let Trump off the hook:

“I was surprised that the media went to DEFCON 1 over Trump’s riots comment. I mean, I’ve used that phrase, ‘oh, there will be riots if this happens,’ and I thought it was hyperbole.”

That is typical of what is coming from the Trump apologists at Fox News. They are lock-step in agreement that Trump’s dangerous language is merely a figure of speech or, at worst, a careless exaggeration. What they seem to be purposefully sweep under the rug is the full story that Trump is telling his glassy-eyed disciples. That story includes advocating openly hostile behavior such as his desire to “punch [protesters] in the face,” and his praising of an assault about which he said the protester “deserved to be roughed up.” He lamented the old days when protesters would be “carried out on a stretcher,” and even offered to pay the legal fees of his goons if they “knocked the crap out of” some protesters (see the video below). In light of all of that, his talk of riots can no longer be dismissed as hyperbole. What Trump actually said was…

In other words, if his tyrannical orders are not obeyed, his followers have his permission to fulfill his prophecy. He knows exactly what his storm-Trumpers are capable of. This was an unambiguous threat intended by Trump to convey that he is determined to be the GOP nominee, or else. And if he is not exalted, riots will ensue. Of course he says that he “wouldn’t lead it,” but conspicuously never says that it shouldn’t happen. That wasn’t an accident. It was a message.

For Howard Kurtz to pretend that Trump was entertaining a flight of fancy and meant no harm requires a massive dose of self-delusion. And on that measure, Kurtz is full of it. He has performed the duties of Trump’s fluffer before, as he tried to exempt Trump from criticism for his repugnant remarks, while simultaneously trying to keep Trump’s verbal fecal splatter from soiling the Republican Party.

Kurtz had help from his Fox News comrades who similarly stepped up to scour the scum off of Trump. Fox regulars Steve Doocy, Brian Kilmeade, Ainsley Earhardt, Greta Van Susteren, Andrea Tantaros, and Chris Wallace all sought to attach the “figure of speech” fallacy to Trump’s hate-speech.

In addition to whitewashing Trump’s endorsement of riots, Fox made sure that the protesters were disparaged as the real problem simply for exercising their rights to express themselves. In the view of Fox News the First Amendment is only available to conservatives, and dissenters are infringing on them when they seek to speak out. Had Fox been around when Martin Luther King was protesting racist segregation in Alabama, they would have vilified him for interrupting George Wallace’s freedom to oppress black schoolchildren. 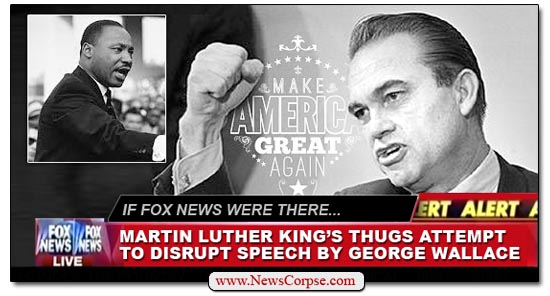 In pursuit of the sort slander that turned bigots like Wallace into heroes, Fox trotted some of their old fear mongering to rile up their dimwitted audience. Trump is standing in today for Wallace, but his bigotry is no different. So Fox is going after Trump’s protesters so as to turn them into villains. And of course Fox’s coverage of protesters is always slanted to portray progressives as evil, but a couple of years ago, when the protesters were the Tea Party, Fox heralded them as patriots. Now the foul remnants of the Tea Party are lining up behind Donald Trump. And Fox News is running the media interference for them.