When Donald Trump announced his candidacy for the Republican nomination for president his unfavorable rating among women was an already dismal 58%. In the intervening months as he campaigned it has gotten considerably worse, rising to an unprecedented 70% unfavorable. And through it all, Trump has demonstrated that he has absolutely no idea why he is hated so much by America’s women. 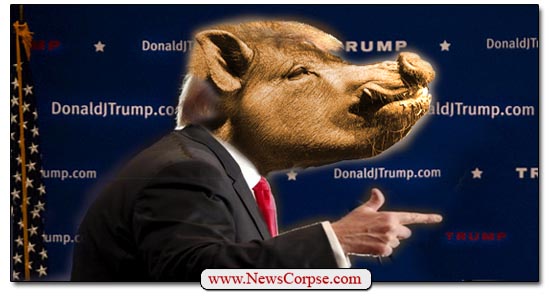 In another of his rambling, rancid stump speeches (which he promised would be more presidential), Trump attempted to address his female problems by attacking Hillary Clinton’s past tribulations with her husband Bill. Apparently Trump still thinks that the former President’s infidelities reflect badly on her. However, the public doesn’t blame Hillary for Bill’s bad behavior, and raising the issue is more likely to bring her sympathy from other women.

So Trump is diverting to a new path aimed at accusing Clinton of ruining the lives of Bill’s booty calls. Trump complained that “they’re going after ME with women?” Then he told his glassy-eyed disciples that…

“She’s been the total enabler. She would go after these women and destroy their lives. She was an unbelievably nasty, mean enabler and what she did to a lot of those women is disgraceful.”

First of all, anything Hillary said about the situation was said at a time when she believed the allegations against her husband were false. She was defending him from what appeared to be political hit jobs. But more to the point, she never said anything that could be remotely described as nasty or destructive. There’s a reason that Trump doesn’t provide any examples to support his attack – they don’t exist.

For Trump, on the other hand, the evidence of his misogyny is voluminous. His attacks on Megyn Kelly, Carly Fiorina, Elizabeth Warren, Rosie O’Donnell, Arianna Huffington, etc., are unarguably nasty and intended to cause harm. And unlike Clinton, Trump himself was the unfaithful person in his multiple marriages. He boasted in public of his infidelities.

But these personal incidents are not even what defines someone’s support for women in a political context. Trump’s new attack strategy is more proof that he continues to misunderstand what constitutes women’s issues. He is reducing it to the bad behavior of an individual. But when you take in the more expansive view of social equality, it has to be noted that it’s Hillary and Bill Clinton who support a woman’s right to choose, equal pay, prohibiting discrimination based on gender, support for victims of abuse, and family leave and child care. Those are actual women’s issues, not some guy being a horndog, and Donald Trump opposes them all – and is also a horndog.

For the record, when a poll was conducted earlier this year asking who is “more respectful of women” – Bill Clinton or Donald Trump – respondents overwhelming chose Bill Clinton (55% to 31%). And that was a Fox News poll.

In the battle for family values, Donald Trump cannot possibly prevail. He is a brutish hate monger who has repeatedly demonstrated a raging chauvinism that has been corroborated by his personal behavior. His defense often rests on the support he gets from his current wife and daughter, as if that validated anything. And don’t forget, we’re talking about the daughter that he wants to bang.