It takes a special kind of stupid to make an argument stating one thing, and then provide support for that argument that proves the opposite. Yet that’s exactly what the New York Post did Friday with an editorial attacking Hillary Clinton. The editorial carried the provocative headline: “Hillary’s latest email lie didn’t even last a week.” 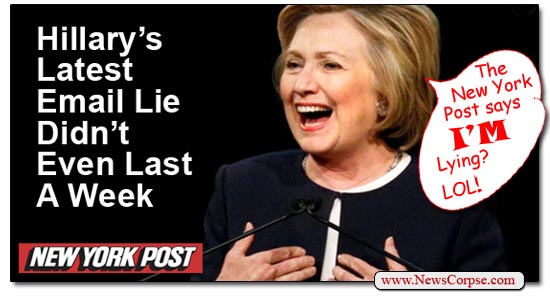 This headline is not only accusing Clinton of lying with her response to a new question about her email, it also declares, without evidence, that she has lied about it previously. The Post expects their readers to blindly absorb their dishonest “reporting” and, lucky for them, they are right. Conservatives have demonstrated that they are more than willing to accept unsubstantiated BS as gospel without ever bothering to verify it.

In this editorial, the unidentified authors claim that Clinton gave a false answer to a question by MSNBC’s Andrea Mitchell who asked “Have you been contacted — or your representatives contacted — by the FBI to set up an interview.” Clinton answered “No,” which the Post immediately labeled a lie. They gave two “reasons” to back up their accusation, both of which don’t hold up.

First, they pointed out that “the FBI has already interviewed Clinton’s closest confidant, Huma Abedin, and other top aides.” So how does that support the claim that Clinton lied? She wasn’t asked if any of her associates were interviewed. She was asked if there had been any efforts to set up an interview for her. She said that there have not been, and all of the available information supports her answer. The Post has no information whatsoever that contradicts her.

The second reason the Post gave to “prove” that Clinton lied is that “officials close to the probe say Hillary’s to be interviewed in the next few weeks — which means she’s surely been contacted.” Actually the Post has no knowledge that Clinton has “surely been contacted” and are themselves lying by making up what they would like to think it “means” when a general statement is made that Clinton will be interviewed at some unspecified time in the future. It does not, in fact, mean what they say it does.

What the Post is not reporting (and that CNN did report) is that “so far investigators haven’t found evidence to prove that Clinton willfully violated the law the U.S. officials say.” That’s not consistent with the guilty-until-proven-innocent (and probably not even then) narrative that the conservative media is pushing. So don’t expect to see it in the Post or on Fox News.

As for the Post’s article, both of the reasons supplied in it to affirm that Clinton lied actually affirm that she told the truth. This is the sort of bogus perversion of journalism that is the hallmark of Rupert Murdoch’s media empire. The Post article was also published on the Fox News community website, Fox Nation which, along with the Post is owned by Murdoch.