One of the most consistent fallacies presented by Fox News on a daily basis is the assignment of blame for for anything that goes wrong exclusively to President Obama. If it can be cast as negative, Obama did it. Some of the laughable liabilities attributed to the President include the riots in Ferguson, MO, California’s drought, Ebola, and even Hurricane Katrina (which happened three years before he was elected. They have blamed him for high gas prices that hurt consumers, as well as for low gas prices that hurt oil companies. There is simply no way Obama can win with these partisan hacks. 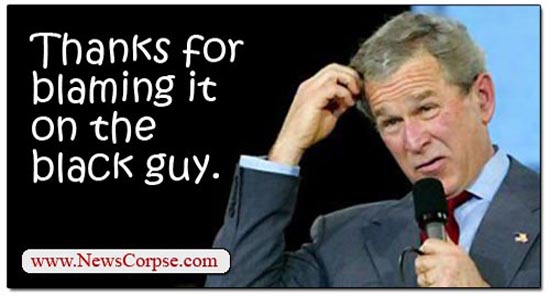 Now, in addition to making Obama shoulder the responsibility for the failures of incompetent Republicans, Fox News is also stealing the credit for anything good that happens during any Democratic administration. This week alone has provided two glaring examples of this stolen honor by Fox pundits who can’t seem find anything that Republicans have done that actually helped the nation.

First we have Eric Bolling, a co-host of Fox’s The Five. During a segment devoted to bashing Hillary Clinton’s campaign, Bolling sought to diminish her husband’s success in orchestrating what was at the time the longest period of non-wartime economic growth in the nation’s history. Since he couldn’t plausibly deny that it was an era of unprecedented prosperity, Bolling served up this pretzel logic: “The reason why Bill [Clinton] did so well is because of Ronald Reagan.”

Of course it was. Never mind that Reagan was followed by four years of his vice-president George H.W. Bush who ran the economy into the ground and was summarily booted out of office. And perish the thought that Bolling would provide any substantive argument to support his made up theory. According to Bolling Reagan deserves the praise simply for being Reagan.

Following that, Fox’s senior political analyst, Brit Hume, made an appearance on Special Report to deliver his explanation for the political successes of Bernie Sanders and Donald Trump. Eventually the discussion diverted to the state of the economy under President Obama. Hume began by asserting that the economy isn’t really in very good shape, but then shifted to proclaim that whatever was good about it wasn’t Obama’s doing, saying that “The credit for rescuing the economy, if it belongs with government, has got to be shared, at least [with George W. Bush].”

And why not? After all, Bush merely presided over the worst economic collapse since the Great Depression. And his response was a basket of bailouts for the banks that were instrumental in the market’s downfall. It wasn’t until Obama came into office that efforts were made to stimulate the economy, and even that was opposed and obstructed by the Republicans in Congress.

In both of the cases above the inspiration for these self-serving assumptions of economic glory stemmed from a comment Hillary Clinton made on the campaign trail. She said that if elected president she would put her husband Bill in charge of revitalizing the economy, something he is demonstrably good at. That comment sent the conservative pundits into a frenzy. They couldn’t abide her reminding people about the boom-time economy over which Clinton presided. So they endeavored to clumsily steal the credit for themselves.

This is just more proof that if Republicans had anything to be proud of they wouldn’t be trying to take credit for things they didn’t do – for things they affirmatively tried to prevent. They are, in effect, admitting that there are no accomplishments attributable to GOP administrations, so by necessity they have to swipe them from Democrats. It’s dishonest and unethical, but that’s never stopped them before.

4 thoughts on “On Fox News, Republican Losers Get Credit For Democratic Successes”