Donald Trump’s history of offensive remarks at his rallies and on social media is well documented. He has called Mexicans rapists; he calls women pigs, slobs, and bimbos; he has tweeted images that disparage African-Americans. His campaign has been an endless source of insults and childish tantrums that have alienated just about everybody. He has even ridiculed his own supporters.

Now Trump has added to that collection an overtly derogatory tweet that uses blatantly anti-Semitic imagery to attack Hillary Clinton. The image placed a Star of David on a pile cash with a caption saying “Most corrupt candidate ever.” 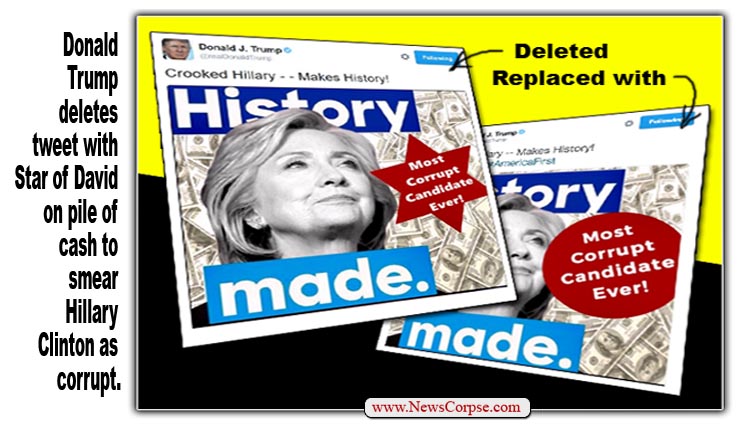 The use of this symbol of Jewish identity in this manner has long been a tactic of bigots and was employed frequently in the Germany of the 1930’s and 1940’s. It continues to be used today by neo-Nazi groups in the U.S. and around the world. The message revisits the derogatory and false insinuation that Jews control all the money and banks to the detriment of everyone else. Trump also included his campaign slogan, “America First,” which he has been asked to abandon by the ADL due to its “undercurrents of anti-Semitism and bigotry.”

Trump’s purpose in posting this tweet was to exploit the results of a Fox News poll showing that Clinton is regarded by 58 percent of respondents as “corrupt.” That isn’t surprising considering the media obsession with Benghazi and email servers. However, Trump was also found to be corrupt by 45 percent in the poll. That’s not exactly something to brag about.

Some other results from the same poll that Trump neglected to report include that more respondents think that Clinton: “would make the right decisions for the country” (48 to Trump’s 42); is intelligent (77 to Trump’s 66); and “cares about people like me” (45 to Trump’s 35). On the downside, Trump is seen as obnoxious (83) and hotheaded (89), compared to Clinton at only 45 and 35 percent respectively. And 51 percent of Republicans want a nominee other than Trump. Overall, Clinton is the preferred choice for president by 44 to 38 percent. Reminder: This is a Fox News poll.

By posting, and then deleting, this nauseating message, Trump is acknowledging that it was unacceptable and offensive. And unlike some of his previous Twitter vulgarities, this was not a retweet. It was a Trump original. After deleting it he made no comment or apology for his loathsome behavior. He thinks that he can just sweep it under the rug and not pay a price for his bigotry. It’s up to all of us to make sure that doesn’t happen. This needs to be shared far and wide. Despite his inbred sense of superiority and entitlement, Trump does not get to offend people at will and then pretend it never happened.

UPDATE: Putting to rest any doubts about whether Trump’s image was deliberately anti-Semitic, a reporter at Mic found the source for the image on a website for neo-Nazis, anti-Semites and white supremacists. Now we know where they go for their campaign themes.