On today’s broadcast of CNN’s State of the Union, fill-in host Brianna Keilar interviewed Donald Trump’s former campaign manager Corey Lewandowski. Last month Lewandowski was fired by Trump and then hired by CNN within a few days despite the fact that he has a contract that prohibits him from saying anything critical about his ex-boss. 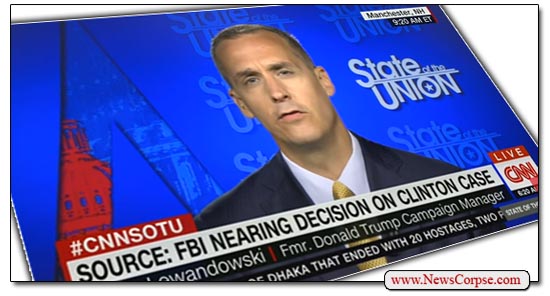 Well, Lewandowski is surely in the clear after today’s performance. He not only refrained from any criticism of Trump, he delivered eight minutes of non-stop adulation and shameless up-sucking. He even defended Trump’s use of a blatantly anti-Semitic image in a tweet attacking Hillary Clinton even though Trump himself wouldn’t defend it (he deleted it without comment or apology).

Much of the interview, however, involved the meeting between Hillary Clinton and the FBI to discuss the matter of her emails and the private server she used. There was no new information reported following the meeting except for multiple sources telling CNN and MSNBC that the FBI has concluded that no laws were violated and no charges will be brought. On this subject Keilar asked Lewandowski…

“Corey, the big news this weekend, Hillary Clinton meeting with the FBI – three and a half hours she was meeting with them – and sources tell CNN that this investigation could wrap up before the convention. And if she is cleared of wrongdoing by the Justice Department as we expect, short of her making some sort of mistake in her interview yesterday is what is going to happen, will that deprive Donald Trump of a key political weapon?”

Without even waiting for Lewandowski to respond the answer was obvious. Trump, and every other Republican, have already tipped their hands to reveal a strategy wherein Clinton will continue to be vilified as guilty regardless of the outcome of the investigation. They intend to go on using this weapon even if it is shooting blanks. If Clinton is cleared they will just insist that the Justice Department is corrupt and that the White House is threatening to dispatch killer drones to deal with anyone who goes after Clinton. So Lewandowski did deny that Trump will be deprived of a weapon, but it’s what he said immediately after that that is truly disturbing.

“I think what you have is the American public is so frustrated right now that Hillary Clinton has been under investigation from the FBI from as many as 150 agents for a long time.”

Certainly the American public is frustrated by the seemingly endless parade of bogus Clinton-bashing scandals, not one of which has produced any evidence of wrongdoing despite spending hundreds of hours and millions of dollars on partisan efforts to tarnish her reputation. However, the allegation that there were hundreds of agents investigating this matter was proven to be false long ago. Originally there were anonymous reports from the Washington Post and Fox News that as many as 150 agents were involved, but that was quickly debunked with subsequent reports saying that talk of 150 agents was “ridiculous” and that “the number is closer to 12.”

The fact that Lewandowski would propagate this dishonest argument after it was already know to be untrue is typical of the Trump campaign’s deliberately deceitful modus operandi. While most candidates would cease to use information that they knew was false, that little detail doesn’t seem to bother Trump or his cronies. This is also further evidence that Lewandowski is still working for Trump while he’s getting paid by CNN. And worst of all, it shows that CNN is unable or unwilling to correct the record when a Trump shill dispenses flagrant lies on their air.