With the Republican National Convention set to begin next week, Donald Trump finally released the schedule of speakers. Two weeks ago Trump tweeted that “The speakers slots at the Republican Convention are totally filled” and promised to release the list the next day. That highly anticipated announcement took two weeks to materialize. Perhaps the reason is that the list, as just revealed by the New York Times, is an embarrassing collection of has beens and D-List denizens of the tabloids. Other than speculation about who Trump will select as a running mate (which Fox News may have inadvertently revealed), this is the most hotly sought after convention news, but the Trump camp is treating it as an afterthought.

The Times, however, is reporting that the lineup is “lacking many of the party’s rising stars” and relies instead on “Trump’s eclectic collection of friends, celebrities and relatives.” What’s more, in an effort to transform the convention into a shallow spectacle that draws on Trump’s Reality TV experience, the nightly schedule has been assigned dramatic themes akin to chapters in a soap opera:

“There are plans to emphasize different themes each night of the convention. Mr. Trump wants to touch on a few of his favorite hot-button issues, like the 2012 attack on the American diplomatic compound in Benghazi, former President Clinton’s infidelities and border security.”

Really? Trump and his handlers actually think it’s a good idea to dredge up Benghazi, which multiple investigations, including those led by Republicans in Congress, absolved Hillary Clinton and the Obama administration of any wrongdoing. Even the latest Special Committee, after spending two years and seven million dollars, found nothing of significance that wasn’t already known or reported by one of the seven other congressional committees (which didn’t stop Fox News from desperately trying to find a way to spin it negatively).

And the night devoted to “President Clinton’s infidelities” is certain to be a major draw to anyone interested in twenty year old personal scandals that were thoroughly reported at the time and have been resolved by the Clinton’s who, to their credit, preserved their family and their marriage vows. Contrast that with Donald Trump, who has openly bragged about his adulterous ways and is currently on his third wife (so far).

The list of speakers obtained by the Times is a revealing look into the weakness of Trump’s support and his inability to produce an event that voters will find relevant to their lives. Rather than praise for the candidate, the schedule is focused on negativity toward his opponent and the Americans who he has already maligned for the past year. From the Times:

Wow! I can hardly wait. In addition to Benghazi, Trump will spend a portion of the first night on his racist immigration proposals by featuring speakers intent on demeaning Latino-Americans. His second night’s economic focus is headlined by the president of the Ultimate Fighting Championship, who will be followed by crowd pleasers like Mitch McConnell and Scott Walker. The third night welcomes Florida’s Attorney General, Pam Bondi, who also stars in an alleged bribery scheme wherein she sought a campaign donation from Trump before shelving an investigation into his phony university. And on the fourth night, which ought to be the grand finale, Trump is trotting out a failed NFL quarterback who is currently unemployed, and a couple of fellow billionaires. And of course his family is distributed on various nights throughout the convention.

Where are the GOP’s leading lights and rising stars? Most are not even attending the convention. None of the living Republican presidents will be there. Nor will the past two GOP candidates for president. Nor will at least a third of the sitting Republican senators. And only three out of the seventeen Republicans who ran for president in 2016 will appear at the podium, and one of those (Ted Cruz) hasn’t even endorsed Trump.

This may be one of the most pathetic political conventions in modern times. The animosity Trump has sown among his peers via his abhorrent policies, inherent hostility, and childish behavior, has doomed him to casting a third rate affair that will produce more laughter than enthusiasm for his candidacy. Personally, I think my satirical lineup would way more fun: 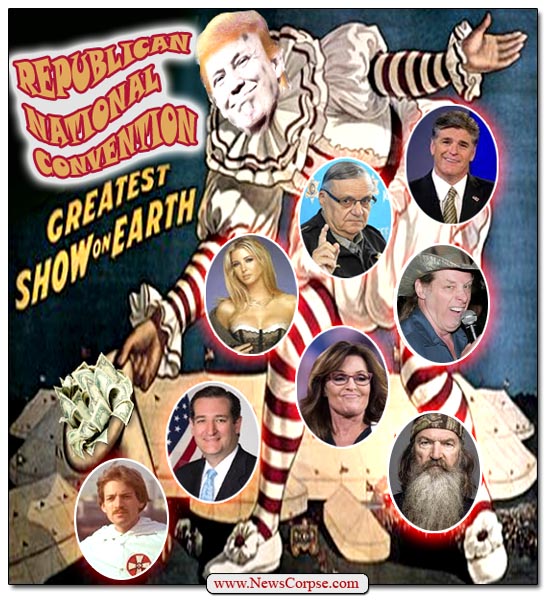 10 thoughts on “EPIC FAIL: Donald Trump Wrangles The Most Laughable Roster Of Speakers For His Convention”