Last night CNN anchor Anderson Cooper appeared on The Late Show with Stephen Colbert. He may not have been expecting the good-natured grilling he was in for. What took place was another example of a comedy show producing better journalism than the “serious” media. 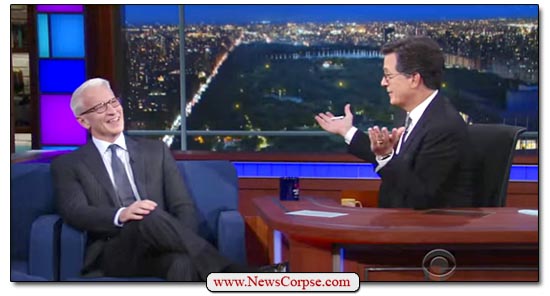 Early in the interview Colbert bit into the meaty subject of CNN’s disgraceful relationship with Donald Trump’s former campaign manager. A few days after leaving the Trump team, Corey Lewandowski signed on with CNN. In the following exchange Cooper sheepishly admits that CNN is employing a commentator who is also a campaign operative.

Colbert: So, he works for you guys. Does he still get any money from the Trump people at the same time?

Cooper: I believe I read he gets a severance, continuing severance from the Trump campaign.

Colbert: So ya’ll are paying him, and Trump is paying him, but he’s on your show doing analysis for a man he still gets cash from?

Cooper: Pretty much. Yeah, I guess that’s one way to look at it. I mean, yes.

That’s pretty much the only way of looking at it. Even worse, Lewandowski has a non-disparagement contract with Trump. So CNN hired a commentator who is contractually prohibited from saying anything negative. Cooper’s only response to this was that “We have people from all the campaigns.” Which is not actually true. While they will invite campaign staff to appear on the network, there are none who are employees while still on the payroll of the candidate. Other than Lewandowski, that is.

As the interview continued, Colbert asked whether Trump is still doing interviews with CNN. Cooper confirmed that he is not, noting that he’s only been doing interviews with Fox News. He elaborated saying that “He does a lot of interviews with Hannity.” “Who evidently advises his campaign at the same time,” Colbert replied. This is all accurate, but for some reason Cooper only talks about it on The Late Show. CNN’s viewers would benefit from this information.

The best moment came when the discussion got to Trump’s wavering positions on immigration. Colbert observed that Trump has been less than forthcoming about his stance, which has been shifting wildly in the past couple of days. Then Colbert offered this homey perspective from Trump’s point of view:

Anyone who has been paying attention already knows what’s in that package. And it isn’t a new X-Box. Colbert managed to illustrate the deceitfulness of Trump’s vacillating rhetoric in a short and humorous comment that says more than most news programs say in an hour. And Cooper was reduced to grinning timidly when faced with the truth about his network. It’s just sad that news organizations are so bad at this sort of reporting that we have to rely on comedy shows.