Self proclaimed “Culture Warrior” Bill O’Reilly is very concerned about the harm being done by the Internet. He devoted a segment of the O’Reilly Factor on Fox News to the question: Is the internet creating a culture of hate in the US? Well, as a veteran hate monger, he should know. 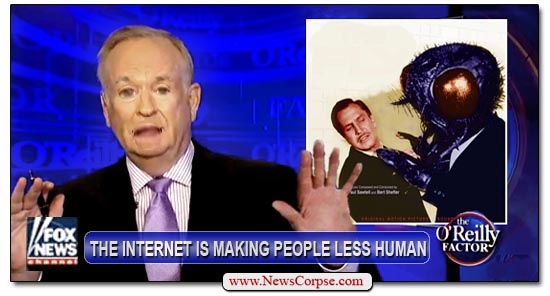 The segment began with O’Reilly complaining about what he called an “online addiction” suffered by eighty percent of Americans. Don’t bother looking for his support for that statistic because it apparently came from the same dark place as the rest of his dubious data. And you don’t want to go there, trust me. After setting up this premise, O’Reilly turned to his guest, “Dr.” Keith Ablow, and asked “Is hatred rising because of social media?” Ablow, a member of the Fox News Medical A-Team, responded:

“Absolutely. Bill … The Internet invites people into it anonymously. It does so via an anonymous technological filter, and therefore it short-circuits empathy. So it favors people who lack empathy, number one, and it threatens to turn just regular folks into less empathetic people as well. So it’s doing that in a two-fold way.”

Why just the other day I received an invitation from the Internet’s anonymous technological filter to short-circuit my empathy. I was too busy translating some pseudo-psychological drivel and had to decline. But no doubt some misanthropes accepted the invitation to relinquish what was left of their ability to care for others. Ablow continued:

“It’s not just through bullying. Because, after all, ISIS and the like use the Internet to recruit. Why? Why is it seemingly so easy? Because people are depersonalized and dehumanized by the Internet. “

Any opportunity to inject ISIS into a discussion on Fox News is mandatory according to the network’s employee contracts. Even if it has nothing to do with the subject at hand. What Ablow leaves out of his analysis is that terrorists are not the only ones using the Internet for recruiting. It is also being used McDonald’s, Wal-Mart, and the U.S. Army. All good examples of organizations seeking fresh, dehumanized candidates to join their zombie operations.

Another guest on the program was Dr. Paul Booth of DePaul University. He made the rational observation that hatred has always existed in society and the Internet didn’t create it. But O’Reilly would have none of that common sense crap. He quickly deflected to whining that “vicious people” online were the problem because “there’s no regulation. They can’t stop it.” He didn’t reveal who should be responsible for stopping it or by what means. But Ablow heartily agreed:

“They can’t stop it. And respectfully, what Dr. Booth misses is that there’s plenty of data suggesting that people who use social media more suffer psychological problems more. And one of them is a decrease in empathy and a lack of connectedness. Remember, the Internet cut its teeth on adult entertainment. The lack of humanity has been built in from the beginning. This coaxes people to be less human.”

“There isn’t a person alive who’s more human because they used the Internet or social media more. It’s psychologically impossible for that to be the case.”

Huh? What makes a person more human? Is there a person alive who’s more human because they used television or chiropractors or Prozac? If you’re only 81 percent human now, what’s the other 19 percent? Yorkshire Terrier? Ablow is making no sense at all. He is literally blabbering gibberish. Which was the perfect segue into O’Reilly’s summation:

“My main point is this. That there’s so much garbage on it. And that garbage finds its way out into the legitimate media. […] And now we’re having mainstream media quote this stuff. It’s all “Don’t blame me. I saw it on social media.” I mean it’s like nobody’s safe. Who’s safe?”

Bill O’Reilly is condemning the whole reason for Fox News’ existence: Putting out garbage that finds its way out into the legitimate media. What’s more, he just threw Donald Trump under the bus for using the “Don’t blame me. I saw it on social media” defense. After being called out on Meet the Press for posting a hoax video on twitter, Trump admitted that “All I know is what’s on the Internet.” And taking it to the next level is Trump fluffer Rudy Giuliani, who advised Fox News viewers to use the Internet to look up videos about Hillary Clinton’s precarious health. Because that’s where all the best medical diagnoses by whackoids like Alex Jones and Drudge are published.