This week President Obama paid tribute to a group of distinguished Americans who represent the best of our nation’s culture. At a White House ceremony Obama paid tribute to recipients of the National Medal for the Arts and the Humanities. They come from diverse world’s of theater, literature, music, and other creative occupations. Among the honorees were beloved and revered figures like Mel Brooks and Morgan Freeman. But there is something that several of them share besides a passion to enrich the lives of others. 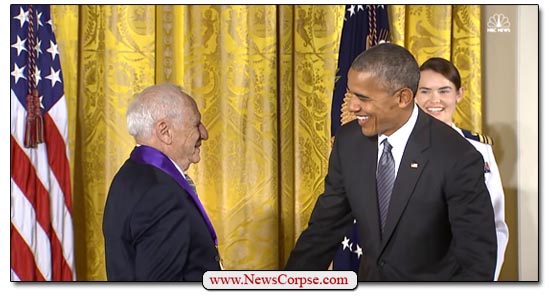 Many of the honorees have distinct ideas about the Republican nominee for president, Donald Trump. And these intelligent, insightful communicators have not been particularly impressed. Here are some of the opinions articulated in the past by these renowned observers of the human condition.

Actor Morgan Freeman:
“Donald Trump is the Honey Boo Boo of rich people.”
[Note: Freeman is an avid Clinton supporter and narrated the biography video that played at the Democratic convention]

Author Sandra Cisneros:
“Donald Trump is a very frightened man. Anyone who is frightened has to bluster and yell and shout.”

Author Ron Chernow:
The Trump campaign disturbed him more than “any other presidential campaign in our history.”

Musician Wynton Marsalis:
“It’s cheap populism. It’s an attempt to get a voter base. They used to scapegoat black people, but now there are so many black people in jail they use Mexicans.”

Singer/Actor Audra McDonald:
So the KKK, Vladmir Putin, and Kim Jong-Un all endorse Trump for president…Are we sure this isn’t an episode of South Park?

Chef Jose Andres:
Trump is “a man whose statements had made him a pariah for the great majority of the Hispanic community.” [Note: Andres is currently in litigation with Trump after pulling his restaurant out of Trump’s new Washington, DC hotel. The dispute arose following Trump’s campaign announcement during which he called Mexicans rapists and criminals]

Actor/Writer/Director Mel Brooks:
“If I were doing a sitcom I’d do it about a powerful idiot like this guy, who’s running a big corporation or a big network and we’d get to see behind the scenes what an idiot he is.”

As a special bonus for attendees of the ceremony, when Mel Brooks rose to accept his medal he smiled graciously and then tried to pants the President. However, setting aside that brief and hilarious departure from decorum, these recipients are themselves a tribute to the spirit and vision of American creativity. Their experience and wisdom is both representative and inspirational. And it is not insignificant that so many people of this stature regard Donald Trump as a national embarrassment. If only there were an award for that.

2 thoughts on “Obama Presents Medals For The Arts: Here’s What The Honorees Think Of Donald Trump”