The chant rang out loudly at Donald Trump’s campaign rallies: “Lock her up!” It was a taunt aimed at Hillary Clinton who Trump accused of violating unspecified laws. The primary focus of his accusations was the Clinton Foundation, a global charity that has benefited millions and received the highest ratings from charity watchdog groups.

There has never been a verified assertion of wrongdoing by Clinton, nor any evidence of favoritism toward donors. Trump himself donated $100,000 to the Clinton Foundation. Nevertheless, he continued to call his opponent “Crooked Hillary” and charge her with running a criminal pay-to-play operation. 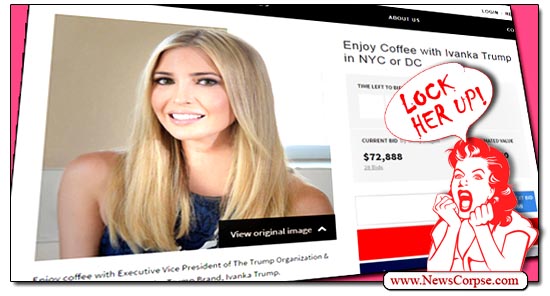 Which makes the actions of his daughter Ivanka Trump all the more disturbing. Last week she put up an auction on the Charitybuzz website. It offered an opportunity to “Enjoy Coffee with Ivanka Trump.” The bidding started at a hefty $50,000. And at last check it had risen to over $72,000. That limits the potential winners to a narrow community of elites who are likely to expect something for their generosity. In fact, the New York Times interviewed some of the bidders who came right out and admitted it. For instance, Ozan M. Ozkural, a London-based investment manager, told the Times that he “wanted to meet with Ms. Trump to gain insight into topics like President-elect Donald J. Trump’s possible future dealings with Turkey and other nations where Mr. Ozkural invests.” The Times further noted that:

“Mr. Ozkural is one of several high-profile bidders in a feverish competition to win time with one of Mr. Trump’s children. Other bidders include the owner of a Tex-Mex restaurant chain from Houston who wants to press Mr. Trump, through his daughter, about immigration policy, and a real estate executive and fringe presidential candidate from Florida who wants to send a message to Mr. Trump about election fraud.”

This is precisely the sort of shady behavior that Trump had attributed to Clinton. And it adds to the previously reported conflicts of interest that have hounded Trump for months. He has far flung financial enterprises that present myriad opportunities for rampant corruption. The Washington, D.C. hotel that was recently completed already hosts foreign officials seeking to curry favor with Trump. And his claims that he will hand off his businesses to his kids ring hollow when his kids are active in his transition and administration. He promised to hold a press conference to iron out these matters, but canceled it earlier this week.

The fact that the stated purpose of the auction was to raise money for charity hardly diminishes the impropriety. For one thing, the money doesn’t actually go to the St. Jude Children’s Research Hospital, as the website says. Instead, it goes to the Eric Trump Foundation. There is no way of knowing where it goes from there. And we already have the example of Papa Trump’s charity taking donations for veterans, but failing to pass them on to the intended recipients. For another thing, Trump wouldn’t let Clinton off the hook under similar circumstance, so why should Ivanka be let off?

Shortly after the Times began inquiring about Ivanka’s auction it mysteriously disappeared from the website. [Note: It is cached here] But that doesn’t remove the stench of corruption that surrounds Trump and his clan. In fact, the unexplained removal is a de facto admission that there was something fishy about the whole endeavor. And they may have still accepted the last high bid prior to the deletion. Unfortunately, we may never know what the bidder is getting for his money. And the same is true for the hundreds of other conflicts of interest the will infect Trump’s presidency.