There is an unmistakable aura of cult worship in the ranks of Donald Trump’s followers. They are frighteningly gullible and susceptible to suggestion. This is evident in their lockstep approval of the most repugnant policies ever put forth by a successful American politician. 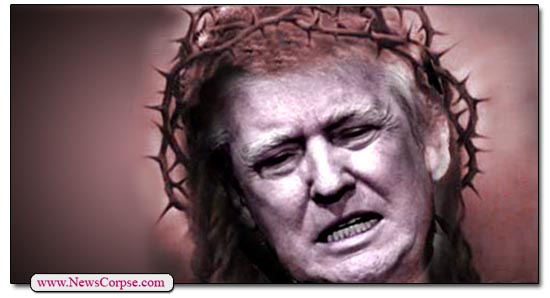 What’s even worse is their ability to entirely contradict their principles whenever their dear leader asks them to. Examples of this are abundant. Just since Election Day Trump has reversed or moderated his position the border wall, immigrant deportation, ObamaCare, locking up Hillary Clinton, and Obama’s birthplace. Not that his positions on anything were ever consistent. After calling Obama “the worst president in history,” he now regards him as a friend and trusted adviser. He’s met with Mitt Romney and and Al Gore. And he is now defending former adversaries he previously insulted bitterly (Paul Ryan, Ted Cruz). He’s even putting them in his cabinet (Ben Carson, Rick Perry).

None of this seems to phase his followers. They tenaciously cling to him as they would a “prophet” who repeatedly predicts the date the world will end, only to revise it after the world has the audacity to continue existing. And on Saturday Trump’s disciples proved once again how devoted they are to the Messiah of MAGA (Make America Great Again). At a rally in Orlando, Trump sought to flatter his flock by recognizing how far they have come since the early days of his campaign:

“You people are vicious, violent, screaming, ‘Where’s the wall? We want the wall!’ Screaming, ‘Prison! Prison! Lock her up!’ I mean you were going crazy. I mean, you were nasty and mean and vicious and you wanted to win, right?”

Curiously, in Trumpland that’s flattery. His intent was to compliment them on their vigorous efforts to achieve victory. However, it was actually an admission that throughout his campaign his supporters engaged in horrendous acts of bigotry and violence. That was all documented at the time, but Trump stubbornly denied reality. He called his rallies “love fests” where the only signs of hostility came from protesters. It’s rather jarring to hear him finally confess to the nastiness that marked nearly every public appearance he made.

But Trump wasn’t through. He immediately followed up with a sort of hypnotic suggestion to the crowd. It sounded as if he was trying to sooth them into a trance-like state where they would be complacent and controllable. In an uncharacteristic, and eerily tranquilizing, voice he said:

“But now, you’re mellow and you’re cool and you’re not nearly as vicious or violent. Right? Because we won. Right?”

He was seducing them into a somnambulant state. Their mercurial demeanor prior to the election was no longer useful and it was time to relax and obey. Trump literally praised them for being less “vicious or violent.” This was the first time that he admitted they were ever such. And they don’t seem to object to being called nasty and vicious. But now he wants them to chill out and let him take over.

The problem with this, other than it’s obvious creepiness, is that by exercising this kind of control, Trump has become something more than a politician. He is a priestly figure who commands a glassy-eyed congregation. And whenever he needs them to revert back to viciousness and violence, he needs only to waive his tiny hand.