America’s Robber Baron-Elect, Donald Trump, disgorged himself on Twitter again in a pre-dawn diatribe. This one sought to allay the fears of his extensive conflicts of interest by repeating his prior insufficient explanations. 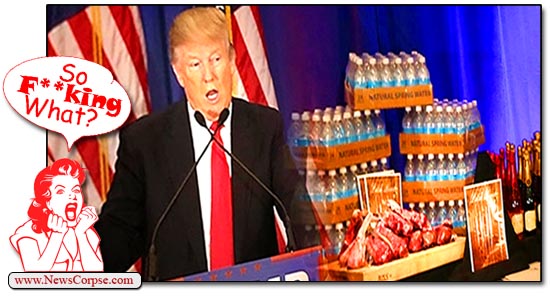 Here are the tweets he fired off in his sleepless rant:

great business in total in order to fully focus on running the country in order to MAKE AMERICA GREAT AGAIN! While I am not mandated to ….

do this under the law, I feel it is visually important, as President, to in no way have a conflict of interest with my various businesses..

Hence, legal documents are being crafted which take me completely out of business operations. The Presidency is a far more important task!

Once again, he seems to think that handing his businesses off to his kids removes the potential for corruption. All it does is appoints his kids as the executors of his worldwide graft and bribery operations. He still has complete knowledge of his assets and what government measures would benefit them. Family members cannot be characterized as a “blind trust” and most of his properties around the world have his name plastered on them in gold.

Trump’s Washington, D.C. hotel is already playing host to foreign dignitaries. These guests have admitted that they booked the venue to ingratiate themselves to the President-elect. Consequently, Trump could be in violation of the Constitution’s emoluments clause immediately after taking the oath of office.

Trump casually asserts that he is not mandated by law to divest himself, but that’s not what the Constitution says. He further states that it is only “visually important” to avoid conflicts of interest. Actually avoiding them doesn’t appear to be on his agenda. That suggests that if he can effectively hide his crookedness it would be OK. If he really believes that the presidency is “a far more important task” than his real estate ventures, then why won’t he divest?

There is, perhaps, something more significant in his tweets than the old news that he is promoting his Trumpkins. That’s the announcement that he will hold a press conference on December 15, to address the subject. Trump has not held a press conference in the three weeks since Election Day. That’s the longest period a president-elect has gone without a post-election press conference in forty years. But it’s even worse than that because he hasn’t had a formal press conference at all since July. In fact, with only four exceptions, he hasn’t been interviewed on a non-Fox News outlet in nearly six months. This was so egregious that Fox News even reported it.

It’s not for lack of newsworthy discussion topics. By avoiding the press Trump has evaded questions on serious issues that impact the nation. For instance, an election that is tainted by allegations of voter suppression and his loss of the popular vote. At least a dozen women who are charging him with sexual assault. His unsavory connections to Russia and its efforts to interfere with the election. Payment of $25 million to settle a lawsuit to compensate the fraud victims of his phony Trump University. His cabinet and administration appointees who are affiliated with radical racist organizations. And, of course, his growing list of ethically compromising conflicts of interest.

Now he says he will hold a press conference. The last time he said that he ended up staging an infomercial for his hotel, steaks, and other sundry QVC-esque commodities. Trump enjoys screwing with the press almost as much as lying to it. Consequently, we ought not to expect him to keep his word about the purpose of this gathering. In fact, we should not necessarily expect there to be one at all. Stay tuned.

4 thoughts on “SO F*CKING WHAT? Trump Tweets That He’ll Hand Business Over To His Fully Conflicted Kids”