On Tuesday the Republican Senate Majority Leader, Mitch McConnell, was forced to make an embarrassing announcement. After insisting that the Senate would vote on the GOP’s ObamaCare repeal bill before the July fourth recess, he has now removed it from the schedule. He had a good reason. There was no way it pass. At least nine Republican senators had indicated that they would vote no. 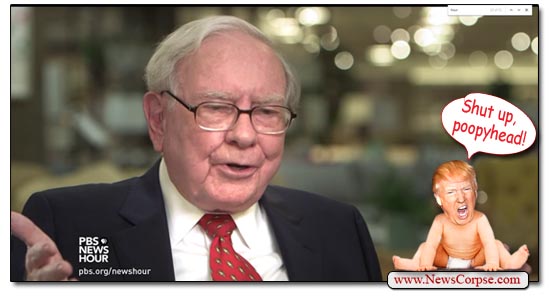 The so-called “Better Care Reconciliation Act” is not only unpopular with some senate Republicans. Recent polling shows that the American people are overwhelmingly opposed to it. The USA TODAY/Suffolk University Poll puts its approval at only twelve percent. The NPR/PBS NewsHour/Marist poll is only slightly better with seventeen percent of Americans approving. That includes support from only thirty-five percent of Republicans. [And this just in: Even the latest poll from Fox News shows approval at only twenty-seven percent. Twice as many oppose]

These are disastrous numbers for any public policy. It’s startling that the GOP would even be interested in pursuing this farce. And yet, McConnell continues to be optimistic about its prospects for passage. So does Donald Trump, who just met with the GOP senate caucus and celebrated their non-achievement.

Among the skeptics of the Republican plan to make twenty-two million more people uninsured is billionaire investor Warren Buffett. In an interview with PBS’s Judy Woodruff (video below), Buffett made his opinion crystal clear. He expressed his support for a more inclusive healthcare plan saying that single-payer “probably is the best system.” Then he outlined what is one of the most troubling and unfair aspects in the GOP bill in the following exchange:

Buffett: “Well, I brought my tax return along for the last year. I filed this on April 15. And if the Republican — well, if the bill that passed the House with 217 votes had been in effect this year, I would have saved — I can give you the exact figure. I would have saved $679,999, or over 17 percent of my tax bill.

“There’s nothing ambiguous about that. I will be given a 17 percent tax cut. And the people it’s directed at are couples with $250,000 or more of income. You could entitle this, you know, Relief for the Rich Act or something, because it — I have got friends where it would have saved them as much as — it gets into the $10-million-and-up figure.

Bringing in his tax return to provide a tangible example of how the wealthy would benefit was a nice touch. It was an effective method to drive the point home. But it was also subtle dig at Trump, who still refuses to release any of his tax returns. And Buffett had something to say on the subject of politicians feathering their own nests as well:

“I might point out — it might be an interesting question. I think members of the Senate and the House get $174,000 a year. But most of them have — if you look at the disclosures, they have substantial other income. If they get to higher than $250,000, as a married couple, or $200,000 as a single person, they have given themselves a big, big tax cut, if they — if they voted for this.”

Indeed. The median net worth of members of Congress is slightly more a million dollars. Fifty-one percent are millionaires. Obviously, they would personally profit from the changes proposed in the Republican bill. And that profit comes at the expense of millions of Americans being thrown off of their insurance plans. Millions more would suffer higher premiums and deductibles, fewer services, and denial of coverage for preexisting conditions.

Buffett has long been an advocate for average Americans, despite his great good fortune. His critical observation that he pays a lower tax rate than his secretary became known as the “Buffett Rule.” He’s a shining example of a Patriotic Millionaire (billionaire) who puts the welfare of his country and fellow citizens above his own personal interests. It’s the sort of compassion that Republicans ought to exercise when crafting their healthcare bill. But then, why would they start now? They have never done it before.