It’s been five days since Donald Trump fell off the crazy train into the abyss of neo-Nazi advocacy. His press conference last Tuesday will be remembered as a tribute to the white supremacists that helped to elect him. To this day they comprise a significant segment of his remaining support. And despite the widespread criticism he’s received, Trump clings to his abhorrent views. 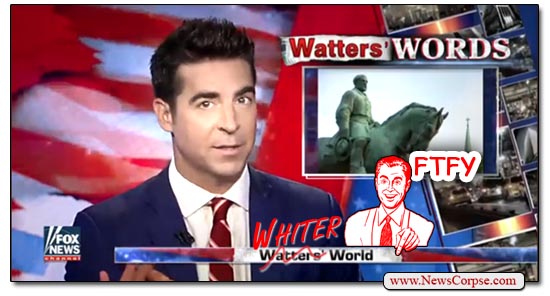 Naturally, Fox News continues to shill for the President. They have staunchly defended the most heinous comments that flow from his diseased psyche. Somehow they have managed to justify his admissions of sexual assault, his insults to veterans, his unsavory connections to Russia, and his glaring ignorance of every subject he addresses. So it isn’t surprising that they find cause to agree with his unimaginable covenant with treasonous Americans.

The debate over the preservation of statues commemorating Confederate traitors has taken center stage at Fox News. But they are intellectually incapable of grasping the simplest concepts. They complain that moving these offensive monuments to museums will result in the abolition of history. Since when do people learn history from lumps of bronze in the park? Statues are not historical lessons, they are tributes. We have no statues of Hitler, yet most Americans have a pretty good idea of who he was and what he represented. And anyone interested in the Civil War can find plenty of information at the library.

Undeterred by that common sense, Fox News ignoramus Jesse Watters stared into his camera Sunday night and literally perverted history. He regurgitated a favorite canard of conservative white-wingers who lie shamelessly about America’s past:

“Let’s also remember that all of these Confederate war heroes were Democrats. Democrats were the party of slavery. Maybe the Democrats want to tear down these statues so the country forgets that the Democratic Party enslaved black people. But I actually think that many on the left want to destroy any monument of revered historical American leaders.”

There is so much wrong with that brief mental flatulence that it’s hard to know where to begin. Let’s start with his bastardization of history. Most people with a high school diploma know that Southern Democrats did dominate the Confederacy. They rejected the Republican politics of Abraham Lincoln who led the nation in a war against the slave states. But that affiliation flipped in the twentieth century as Democrats became the party of working Americans. That includes African Americans. President Johnson cast the remaining bigots out of the Democratic Party when he signed the Civil Rights Act and the Voting Rights Act. From that point on, the Southern racists abandoned the Democrats and took up with Republicans who were happy to preserve Jim Crow laws, segregation, and white rule.

Consequently, it’s a lie of omission to refer to Democrats as “the party of slavery.” And it’s readily apparent where the bigots reside today politically. The Republican Party is currently the home of the KKK, the neo-Nazis, the alt-right, and all the other groups with deceptive labels attached to institutional racism. Just ask former KKK Imperial Wizard, David Duke, or white Nationalist Richard Spencer. Both are fervent Trump supporters. The claim made by Watters is only valid if you deliberately ignore the past hundred hundred years and today’s reality.

Then Watters made the flagrantly idiotic claim that Democrats want to tear down the Confederate statues so the country forgets their role in slavery. That makes no sense at all. You don’t make people forget something by turning it into a raging controversy. What’s more, Democrats are openly condemning slavery and everyone who participated in it. And it’s Republicans who are insisting that the statues remain. The GOP is not asking to keep the statues to remind people of the Democrats’ past. They want to keep them as tributes to the slave states and the traitors who fought for them. That’s a fact that Watters has conveniently glanced past.

Finally, Watters admits that, in his view, the traitors of the Confederacy are “revered historical American leaders.” Now he is not mincing words. His theory is that Democrats want to suppress these treasonous cretins that he believes ought to be celebrated. So Watters has revealed his true feelings and his unpatriotic obsession with the people who fought to divide America.

This is what passes for journalism on Fox News. And it’s consistent with the network’s mission to advance Republican politics. All of their primetime hosts (Sean Hannity, Tucker Carlson, The Five) have articulated the same themes. They truly believe that these Confederate statues provide deserved praise to “honorable” Americans. And if they regard Robert E. Lee and Stonewall Jackson as honorable, what are they looking for in a leader today? Of course the disturbing answer to that is that they have already found what they’re looking for. And he is presently residing in the White House.