There’s a peculiar thing about Donald Trump’s campaign against the First Amendment and freedom of the press. That’s how much he actually relies on the press to spew his propaganda and lies. Without the media broadcasting his hate speech who would know about it? 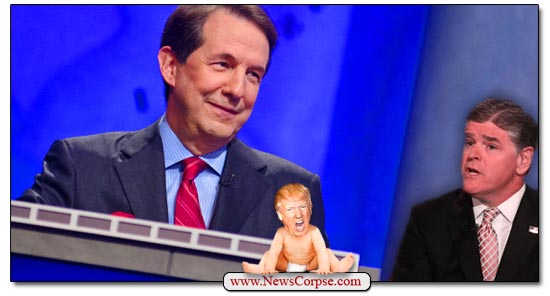 To be sure, he has Fox News, the PR division of the Trump administration. And for some reason they are always left out of any criticism that the President has of the “mainstream” media, despite being the top rated cable news network. For the most part, Fox News is a willing accomplice in the murder of the media. They lay it on more thickly than any other network. And they never seem to grasp the irony that they are demeaning the news business that they pretend to be a part of.

Apparently that obliviousness has finally worn through to at least one member of the Fox team. Chris Wallace, host of Fox News Sunday, addressed this issue in an interview with ABC News and was not shy about expressing that “It bothers me.”

Make no mistake, he’s talking about his fellow Foxies Sean Hannity, Tucker Carlson, and the vegetative Trump bots of Fox and Friends – among others. Wallace seems to recognize that their knee-jerk assaults on any less than flattering coverage of their Orange Messiah isn’t in the best interest of journalism. And the manner in which he dresses them down is a scathing rebuke. Although he may be pulling punches by assuming that there’s “something” in their heads.

ABC News noted the obvious in their commentary, writing that Fox News is “the preferred network for conservatives.” And they cited a study by Media Matters that revealed the depth of Fox’s bias. For instance, Sean Hannity “criticized the press in 90 percent of his monologues from May 15 to Sept. 1.” And that he “used the term ‘fake news’ 67 times.” But something else stood out that makes the glaring prejudices of Fox even more appalling:

“As president, Trump has given interviews to Fox News more than any other outlet, but he has favored Hannity and other supportive hosts like Jeanine Pirro and Jesse Watters. News anchors Wallace, Bret Baier and Shepard Smith and chief White House correspondent John Roberts have been shut out.”

So even while Trump favors the garden variety sycophants at Fox, he is careful to narrow his exposure to only the most slobbering drool merchants at the network. He steers wide of anyone that might accidentally stumble over some honest journalistic principles. Even the Fox News version of a reporter must be avoided at all costs. Trump is only comfortable talking to mindless disciples. Lucky for him, there is no shortage of them at Fox News – or in their audience.