It’s no secret that Fox News has been serving as the de facto PR division of the Republican Party since its inception. It was founded by an arch-conservative newspaper baron (Rupert Murdoch) and a former GOP media strategist (Roger Ailes). It’s schedule is replete with twenty-four straight hours of right-wing propaganda delivered by devoted partisans like Sean Hannity. It is, in fact, Donald Trump’s preferred network with his favorite show, Fox and Friends. 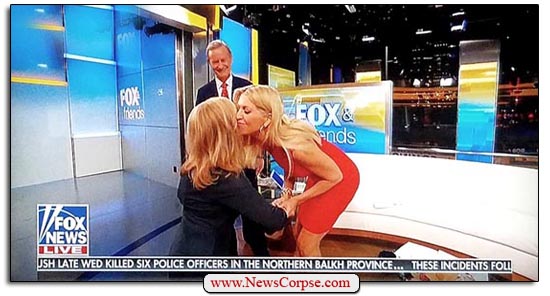 As chummy as this relationship has been for many years, on Thursday morning it took a big step. This political love story advanced from it’s long engagement to a blissful marriage. The wedding took place on Fox’s Outnumbered. This program usually features a rotating cast of female co-hosts from the Fox News roster, plus “one lucky guy” in the guest’s chair. But in this episode one of the co-hosts was not a Fox regular. It was Rep. Marsha Blackburn (R-TN) who also happens to be a candidate for the Senate in Tennessee.

Blackburn was not a guest. She was seated in a chair reserved for co-hosts and was introduced as one. That’s an uncommon position for a sitting congressperson and active candidate to take on an alleged news network. In effect, the network is admitting her into the Fox News family of partisan pundits. It’s a “privilege” that no Democratic representative is ever likely to enjoy. And especially during a contested election for a vacant senate seat, it’s a campaign bonus that is worth millions of dollars. Will Fox give her Democratic opponent equal time? Don’t hold your breath.

In addition to that appearance, Blackburn was on Fox and Friends earlier the same morning. In the teaser for the segment she was brought onto the set and greeted with kisses by the show’s hosts. When was the last you saw a politician arriving for an interview on a “news” network get a wet one planted on her by the people who would be conducting the interview. Imagine the outcry if Nancy Pelosi was greeted that way by Chuck Todd when she showed up for a segment on Meet the Press.

This has become the new normal for Fox News. They hardly even try to live up to the “fair and balanced” slogan (that they dropped earlier this year) anymore. Fox and Friends is the source of many of Donald Trump’s tweets. This morning, for example, they did a story on the long ago debunked conspiracy theory that Hillary Clinton approved a give-away of uranium to the Russians. A few minutes later it showed up on Trump’s Twitter feed.

With the advent of GOP politicians and candidates taking up hosting duties on Fox News, it is impossible to deny the depth of their embrace. It was bad enough when Republicans simply moved back and forth between the two entities between official government jobs. For instance, former GOP Oversight Committee chair, Jason Chaffetz, is now a Fox News contributor. And former Fox and Friends co-host, Heather Nauert, is now the spokesperson for the State Department. They have completely dropped the requirement that these partisans be “former” anything. They are openly mixing up the roles that politicians and pundits are playing. And it’s a gross perversion of the the ethical principles of both.

One thought on “It’s Official: Fox News and the GOP have merged into a single political media enterprise”