The single most repulsive character on the Fox News Cartoon Network is, without a doubt, Tucker Carlson. He has assumed the position of the Grand Wizard of the white nationalist movement with his frequent tirades that literally regurgitate the racist tropes of the hate mongers of the right. A recent example of that took place just last week on a show where Carlson couldn’t figure out how diversity strengthens America. 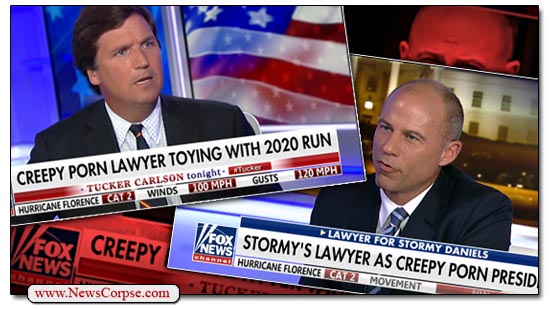 But what occurred on Thursday night’s episode went even farther into the abyss off wingnuttery (video below). Carlson hosted Michael Avenatti, the lawyer for Stormy Daniels, in a what turned into a demolition of Carlson’s already splintered reputation. It began with Carlson introducing some of the ground rules for the TV debate. He said that Avenatti…

The extent there was any doubt as to the lack of professionalism of @TuckerCarlson or @FoxNews before tonight, there is no longer. What happened with the chyron tonight was a disgrace. Complete garbage – trash television. A new low.

Carlson asked his first question, which had to do with what the rational response would be to an act of cyber war by Russia. Avenatti began his answer by saying that “Well, Tucker, I understood that I was coming on your show tonight to talk about the case involving my client…” And that was as far as Avenatti got when Carlson burst in with his first interruption. Avenatti told Carlson that:

“You’ve gotta stop interrupting me, cause one of the conditions of me coming on tonight was that you were not going to do what you do routinely to guests, which is talk over them and interrupt them. So just let me finish with my answer.”

Then Carlson asked his question again, and Avenatti got a little further into his answer when Carlson again broke in, and Avenatti scolded him saying “There you go interrupting me again.” It’s clear how this interview was going to go from just these first few minutes. Avenatti was trying to give substantive responses to Carlson’s inquiries, but Carlson obviously didn’t like that Avenatti’s points included condemnations of Trump for colluding with Russia. So Carlson had to prevent that sort of truth from getting out to his willfully ignorant audience.

Then Carlson goes totally off the rails with an assertion that makes no sense at all. He said that Avenatti should be paying his client, Stormy Daniels, because he has an expensive suit and she’s performing in strip clubs. Huh? What does that have to do with anything? Does Carlson think that any lawyer who is better off financially than his client should be giving the client money?

Avenatti then nailed Carlson for not knowing that Trump’s former personal attorney, Michael Cohen, pleaded guilty to two campaign finance felonies. Carlson tried to claim that they were not violations, but you can’t plead guilty to something that isn’t a crime. Having lost this point, Carlson swings back to why Daniels is performing in “depressing strip clubs,” as if it were Avenatti’s role to tell her what to do. Avenatti replied that she’s doing what she wants and that “This is America” and “if a women wants to perform in a strip club she does so even though people like you demean her.”

There is one lesson that everyone watching this segment ought to take to heart: No one should ever – for any reason – appear on Tucker Carlson’s program. He will lie to your face about the conditions of the agreement to appear. And then he will endeavor to steer the conversation to whatever tangential topic he thinks he can best malign you with. Avenatti actually handled Carlson brilliantly throughout the “interview,” but it was still an exercise in futility that accomplished nothing. Carlson’s mind can not be changed, and neither can the minds of his dimwitted viewers.

While there is a scant amount of comic relief from seeing Carlson squirm, it’s still unproductive and only serves to spike his ratings. That potentially gives him attention from a larger pool of Deplorables when he should be booted off the air for advancing the agenda of neo-Nazis and violent, racist extremists. The sooner he gets canned for advocating his race war, the better for America.