The hypocrites at Fox News are out in force following the midterm elections that returned Democrats to the majority in the House of Representatives. Which isn’t really any different than the way the Fox News hypocrites were behaving before the midterms. But it’s clear that they intend to continue distorting reality for their glassy-eyed and willfully ignorant viewers. 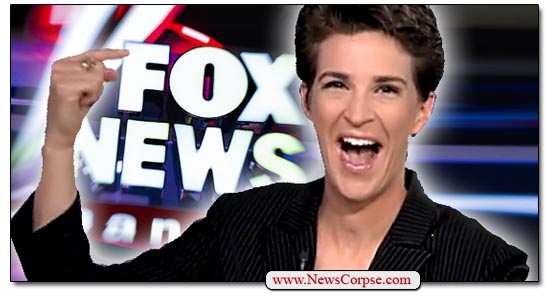 In an article on the Fox News website Thursday, their media correspondent, Brian Flood, sought to criticize MSNBC’s Rachel Maddow for exhibiting a bias in favor of special counsel Robert Mueller. The piece was not addressing anything she did on her program, but rather a tweet she posted that reported the grassroots reaction to Donald Trump firing his Attorney General, Jeff Sessions. That dismissal, and the appointment of Trump flunky Matt Whitaker as Acting Attorney General, was the latest attempt by Trump to obstruct justice by undermining the Mueller probe. Maddow’s tweet simply reported that there were protests planned to advocate for members of Congress to protect Mueller from any interference by the Trump regime:

This is the "Break Glass in Case of Emergency" plan to protect the Mueller investigation.

We knew this would happen at some point — the day has arrived. https://t.co/pmv0aaxfYJ

That tweet was the basis for the article by Flood who characterized it as pro-Mueller and implied that there was something untoward about Maddow posting such a comment. He wrote that:

“Maddow is a leftist activist but was recently paired with Brian Williams during MSNBC’s Election Night coverage. News organizations typically use nonpartisan anchors for such assignments.”

Setting aside the false assertion that Maddow is a leftist activist (to which Maddow had a light-hearted reply), Flood is actually admitting that Fox is not a “news organization” because their election night programming used flagrantly partisan anchors – Tucker Carlson and Laura Ingraham – in their coverage. They were planning to use Sean Hannity as well, according to their pre-broadcast press release, but Hannity was an unexplained no-show. You have to wonder if that had anything to do with Hannity’s campaign stumping for Trump on stage with the President at his last cult rally of the election season.

What’s interesting is that Flood found it necessary to publish a misleading article about Maddow’s alleged bias, but he never published anything about Hannity nuzzling up to Trump on stage, or the anchor chairs occupied by Carlson and Ingraham. It’s a good thing Fox News abandoned their “fair and balanced” slogan last year. Because their own media correspondent can’t live up to it.