The smouldering fear that Donald Trump has been emanting for the past several months is escalating to a five-alarm fire. He is becoming ever more frantic about the legal jeopardy he faces if the report by special counsel Robert Mueller actually sees the light of day. Consequently, he is lashing out with renewed ferocity at Mueller, Congress, and the American people who overwhelmingly (87%) want the report released. 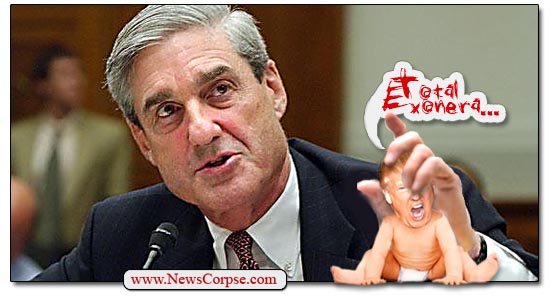 In an unusually light fit of Saturday morning rage-tweeting (he’s golfing), Trump reiterated his adoration for Kim Jong Un, whose leadership Trump praised for its potential to make North Korea “one of the most successful nations of the World!” It’s interesting that he has such confidence in this murderous, communist dictator, while he’s maligning American Democrats as “treasonous” and “socialists” who will destroy the nation.

Trump also retweeted his disgusting video associating Rep. Ilhan Omar with the terrorists of 9/11, despite the fact that he had already pinned to the top of his Twitter page. Apparently he wasn’t satisfied that enough of his Deplorables would see it and be incited to make more racist attacks and death threats.

In addition to those Twidiocies, Trump returned to his obsession over the investigation into his nefarious associations with Russia and obstruction of justice. It’s clear by the content and tone of his ranting that he is riddled with fear. And that all-consuming dread has driven him to a new level of panic and outrage:

There’s a lot of psychoses to unpack in that short spasm of bullpucky. First of all, there are no “Radical Left Democrats” in Congress. Secondly, the Democrats who are there were elected in a Blue Wave by citizens who specifically sent them to Washington to hold Trump accountable. Third, the cost of the investigation was more than paid for by the asset forfeitures assessed against Paul Manafort, Trump’s convicted campaign chairman. Fourth, there is zero evidence of any wrongdoing by Hillary Clinton, the DNC, or the FBI, who Trump is once again insulting as criminals. And fifth, Trump is signaling that he has ordered his stooge in the Justice Department, Attorney General William Barr, to launch an illegal persecution of his political foes.

But that’s not all. The language in Trump’s tweet was deliberate and highly disturbing. He is now saying that Congress has no right to examine the Mueller report. In his previous statements on this subject he has said that he had no problem with the report being released. He even said that Mueller had acted “honorably.” And why not? He insists that the report “totally exonerates” him. Of course, Trump is nothing if not contradictory. He has also bitterly condemned the report that he hasn’t even read.

Something must have changed that made Trump go from “Let it come out, let people see it,” to it was “a hoax from day one” by “13 angry, Trump hating Dems” and “a total waste of time.” And whatever changed more recently must have been even more troubling, because this is the first time that Trump has asserted that the Congress – and by extension the American people – have no right to see the report.

Trump continues to maintain that hasn’t read the Mueller report. That’s believable because there’s credible doubt that he can read. At least he’s known to be averse to it and has his aides summarize most documents for him with short paragraphs and lots of pictures. But he has never said that he hasn’t received a briefing on the contents of the Mueller report. So he may know what’s in it, and that may be what’s driving his fear. Because his public comments, and these panicky tweets that seek to deny the rights of the people, indicate that he’s desperately worried about something. And from all of the evidence that’s already public, he should be.