There is no one on Fox News that makes life harder for Saturday Night Live than “Judge” Jeanine Pirro. Her cartoonishly feverish harangues are nearly impossible to satirize. Pirro herself seems to be doing a mock impersonation of a paranoid schizophrenic on acid. The best way to translate that into comedy is just to yell the already incoherent excerpts from her actual commentaries. 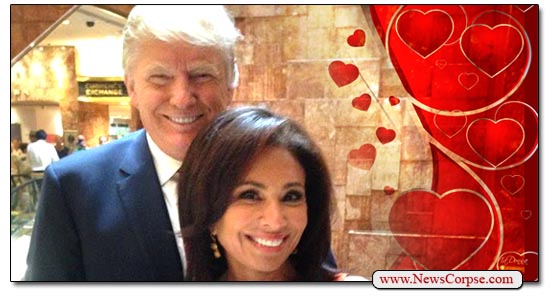 On the latest episode of her Saturday Trump-Fluffing Hour (video below), Pirro outdid herself with an extended diatribe addressing the release of the redacted Mueller report by Trump’s disgraced Attorney General, William Barr. She began the program by asking an ironically self-owning question:

“Are you fed up yet? More than two years of non-stop, unprecedented maligning by the mainstream media, high level Obama administration officials, and disappointed, disgruntled and deranged Democrats, of the commander in chief as the ‘agent of a foreign government,’ a ‘Putin puppet,’ a ‘treasonous dictator,’ all because they despise the outsider president WE put in the Oval Office.”

Anytime a Fox News shill to mentions Trump in the same sentence with descriptives like “agent of a foreign government,” “Putin puppet,” and “treasonous dictator,” you’ve got to consider that a win. But Pirro’s take on conclusions of the Mueller report are indicative of a mind infected by cult worship. For one thing, her assertion that the alleged “maligning” of Trump was unprecedented ignores Obama’s tenure in the Oval Office where he was accused of being a gay, terrorist-sympathizing, communist Muslim, who was born in Kenya. And most of those attacks were by Pirro herself.

What’s more, Pirro’s characterization of Trump as the “outsider president WE put in the Oval Office,” begs the question: Who is “WE”? Fox News? The Deplorables? Vladimir Putin? It certainly wasn’t the American people who favored Hillary Clinton by a margin of three million votes. Nevertheless, Pirro has had enough:

“Enough already. The system worked. The process is over. No collusion. No obstruction. Full cooperation. Enough lives have been damaged. Enough reputations ruined. Enough families destroyed. They took down people with process crimes having nothing to do with Russia.”

So what Pirro regards as a working system is one that makes the election’s loser president. But that doesn’t mean the process is over if there were irregularities such as Trump exploiting Russian interference in the campaign by disseminating stolen data. That’s collusion whether or not he did it via direct interactions with Putin. As for “full cooperation,” that’s not something you can claim when you refused to to talk to the special counsel for fear of being caught in a lie. But Pirro was far from through bloviating:

“I’m not gonna dwell on the fact that the real collusion with Russia was with the Bonnie and Clyde of American politics – Bill and Hillary – who sold our uranium to Russia and pocketed a quick $145 million dollars through their trusty charity.”

There is that textbook passive aggressive attack by saying you aren’t going to dwell on something even as you’re dwelling all over it with frothy saliva dripping from the corner of your smarmy, sarcastic smile. Never mind that there is zero evidence that Hillary engaged in any with any Russian operatives. Or that she profited in any way from the sale of any uranium to Russia. Even Pirro’s Fox News colleague, Shepard Smith, debunked that flagrant lie.

Perhaps the most nauseating part of this mental unraveling is Pirro’s comparison of Bill and Hillary Clinton to Bonnie and Clyde. She didn’t bother to actually include any explanation for why she associated two American public servants with a couple of murderous bank robbers. She probably just thought it would arouse the nether regions of her dimwitted viewers to spill out some unintelligible insults. Which Pirro continued to do as this tedious program dragged on:

“They will seize on the language that you cannot indict a sitting president. Which is simply the law. Yet Mueller comes out and says he cannot exonerate the President of obstruction. There was not sufficient evidence to bring a charge. If there’s not sufficient evidence to bring a charge that should have been the end of it. But no. In a show of political whore-manship – that’s what I said, political whore-manship – Mueller left crumbs for Congress. He added he couldn’t exonerate Trump to give the Democrats something to work with.”

First of all, there is no law that prohibits indicting a sitting president. Pirro is outright lying about that. Also, Pirro complains that a finding that there wasn’t sufficient evidence to bring a charge should be “the end of it.” Which is exactly what Mueller did. He ended his investigation and wrote a report that the Attorney General still won’t allow the American people to see.

However, even the parts that we were allowed to see are filled with evidence that Trump engaged in activities that were either unlawful or immoral. And he clearly left these questions open for Congress to deal with, as is appropriate for his role as special counsel. And for that Pirro calls him a “whore” – twice! And on that note it’s impossible to resist acknowledging that Pirro just dived into a subject that she knows all too well.

Barr is a true warrior and I believe he will follow through on his mission as attorney general. And finally, at long last, bring justice to the people who really deserve it. #OpeningStatement pic.twitter.com/e79AZNqGHM