The United States just suffered through an extraordinarily painful week that saw its citizens being slaughtered by gun violence from California to Texas to Ohio. These were the 249th, 250th, and 251st mass shootings in year that is only 217 days old. The nation is sick with grief and fear. And the situation wasn’t helped much by a presidential address wherein Donald Trump promised nothing and shifted blame. 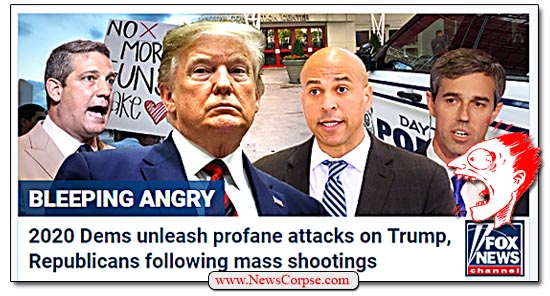 As the sorrowful stories of the victims and their families flow out, the media is generally engaged in expressions of sympathy and efforts to keep the public informed as details about the incidents and perpetrators continue to unfold. Well, most of the media. But over on the Fox News website Monday afternoon, the headline story was a curious and callous exploration of what Fox apparently thinks deserves top billing during this crisis. The headline reads: “2020 Dems unleash profane attacks on Trump, Republicans over mass shootings.”

That’s right. Fox News is headlining the use of naughty words by Democrats who were reacting to tragedies in a manner that most people would consider human. But to Fox this was more worrisome than anything else related to the horrific events of the past week, or any other news story.

The examples of egregious expletives included Sen. Cory Booker saying that Trump’s White House speech was “Such a bulls—t soup of ineffective words.” And then there was Rep. Tim Ryan saying that “Mitch McConnell needs to get off his a– and do something,” and that “Republicans need to get their s— together and stop pandering to the NRA.” Finally, Fox News caught Beto O’Rourke admonishing the press for not recognizing Trump’s complicity in inciting violence by telling them that “You know the s— he’s been saying. […] Members of the press, what the f—?”

The article does at least note that the Democratic majority in the House of Representatives passed the Bipartisan Background Checks Act of 2019 back in February, but that GOP Senate leader Mitch McConnell has refused to bring it up for a vote. Trump also ignored this in his morning speech. However, the article’s obsession with the potty mouthed Democrats failed to criticize Trump, who has distinguished himself as the most vulgar person to ever serve as an American president.

Apparently uncensored expressions of outrage and pain when Americans are massacred in the streets is intolerable to the folks at Fox News. But it’s fine with them if the President lashes out with profanities mainly intended as childish insults aimed at his critics and opponents. For the record, this segment from MSNBC’s The Beat with Ari Melber contains a brief video compilation of Trump’s X-rated rhetoric:

One thought on “With 34 Dead, Fox News Focuses on the Real Problem: Democrats Using Naughty Words”