Anyone who has been paying attention has observed the distinctly authoritarian tendencies that mark the presidency of Donald Trump. He insists that he alone is the solution to any problem. He claims that he’s empowered to do as pleases, despite the Constitution. He smears politicians and the press as “enemies of the people.” And he has a creepy infatuation with tyrannical dictators like Vladimir Putin, Xi Jinping, and Kim Jong Un. 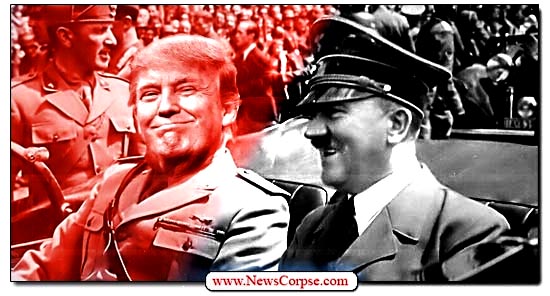 Trump’s aspirations to dictatorship have hardly been secret. He has publicly yearned for powers that his heroes in Russia, China, and North Korea enjoy. That includes being president for life and eliminating his foes in the press.

And now a new book – When at Times the Mob Is Swayed – contains a detailed comparison of Trump’s modus operandi to that of Adolf Hitler. The author, Burt Neuborne, is a noted civil rights attorney who has served in the administrations of both Democrats and Republicans. And a portion of his book addresses similarities between Trump and Hitler that should frighten every American.

What follows are the headings for twenty serious points of comparison between the early Hitler and Trump. (See this excellent article for the details that flesh out each of these points):

These parallels between Hitler and Trump are impossible to ignore. And they should stir sufficient fear and resolve among the American people to rise up in opposition to what may be the most ominous threat to this country’s experiment in democracy since its founding. But no one should be surprised that Trump is a fan of one of the 20th century’s most grotesque villains. When he was campaigning for the Republican nomination for president, Trump was asked a question on this subject by George Stephanopoulos of ABC News:

Stephanopoulos: You’re increasingly compared to Hitler. Does that bother you?
Trump: No, what I’m doing is no different from FDR.

And there you have it. Donald Trump said he was not bothered by comparisons to Adolf Hitler. Can you imagine any other decent American answering that question the way Trump did? But then, why should he be bothered? He was running on the platform of the Nazi Party since he announced his candidacy. What’s more, he justifies his comfort with the association by positively referencing the Japanese internment camps built during the FDR administration, which are universally condemned as one of America’s most shameful actions.

The article above notes another comparison that is just as troubling as the one between Hitler and Trump. That’s the comparison between Hitler’s follower’s and the glassy-eyed Deplorables who exalt Dear Leader Trump:

“The Nazis did not overthrow the Weimar Republic. It fell into their hands as the fruit of Hitler’s satanic ability to mesmerize enough Germans to trade their birthright for a pottage of scapegoating, short-term economic gain, xenophobia, and racism. It could happen here.”

Sound familiar? There is a distinct stench of cult worship that allows Trump’s willfully blind disciples to forgive every sin he commits – from serial adultery, to blatant hate speech, to pitiful ignorance, to relentless lying. Their mesmerized adoration of Trump is identical to that of the Nazi generation that permitted otherwise common Germans to look the other way at abhorrent atrocities and crimes against humanity. Could it happen here? Let’s hope we never find out. But with Trump in the White House – and his cronies scattered throughout the administration – we’ll need to be vigilant and determined to insure that it doesn’t.