The walls are closing in around Donald Trump and as they do his paranoia and desperation threaten to overwhelm his pitifully impotent capacity to cope with difficulty. He is becoming ever more sensitive to anything he regards as negative, even if come from a source that is reliably and nauseatingly adoring. Like Fox News.

On Wednesday Fox News released the results of a survey that found a majority of 51 percent of voters favoring Trump’s impeachment and removal from office. That’s a devastating development for Trump who depends on Fox News to lie, distort, or otherwise misinform their viewers that he is infallibly proceeding with his mission to MAGA. It was so disturbing to Trump that he manned his Twitter machine and lashed out to condemn his State TV Network:

…Court Justice & I turned him down (he’s been terrible ever since), Shep Smith, @donnabrazile (who gave Crooked Hillary the debate questions & got fired from @CNN), & others, @FoxNews doesn’t deliver for US anymore. It is so different than it used to be. Oh well, I’m President!

Trump’s petulant whining that he “NEVER had a good Fox News Poll” is predictably false. He’s had many, and he has tweeted those results with pride. The last time Trump went ape over what he considered Fox’s betrayal, News Corpse noted that it was…

“an unabashed confession that he regards them as being the propaganda battalion of his political army. And their betrayal is an unforgivable sin that cannot be ignored. [and that] all it takes is one less than flattering remark for Trump to explode with outrage and accuse you of treason.”

That’s true now as well as Trump complains that “Fox News doesn’t deliver for US anymore.” Clearly he believes that the their purpose is to “deliver” for him. A few weeks ago Trump said much the same thing in a tweet asserting that “We have to start looking for a new News Outlet. Fox isn’t working for us anymore!” Even Fox’s ultra-conservative Senior Political Analyst, Brit Hume, scolded Trump for that one saying that “Fox News isn’t supposed to work for you.” Of course, that’s exactly what they are supposed to do, but they don’t want to admit it or tolerate Trump doing so.

This isn’t the first time that Trump has had a public meltdown due to his butthurt about Fox News. Some recent outbursts include grumbling that he’s “not happy with Fox“ and he threatened them saying that “I’m the one who calls the shots.” In July he attacked Fox saying that they were “worse than watching low ratings Fake News @CNN,” and that “they forgot the people who got them there!” Trump even threatened to conduct an official investigation into why Fox had stopped airing all of his cult rallies live.

Fox’s offense in this case was publishing their poll that had a fairly realistic assessment of Trump’s unprecedented unpopularity. In addition to bad news about impeachment, Trump is underwater on job performance, corruption, the Ukraine debacle, and he lags other national political figures in popular opinion. But despite Trump’s ire, Fox’s numbers are in line with other polling, particularly on the subject of his impeachment. However, that didn’t stop Trump from blowing up and tweeting bizarre falsehoods about imaginary polls: 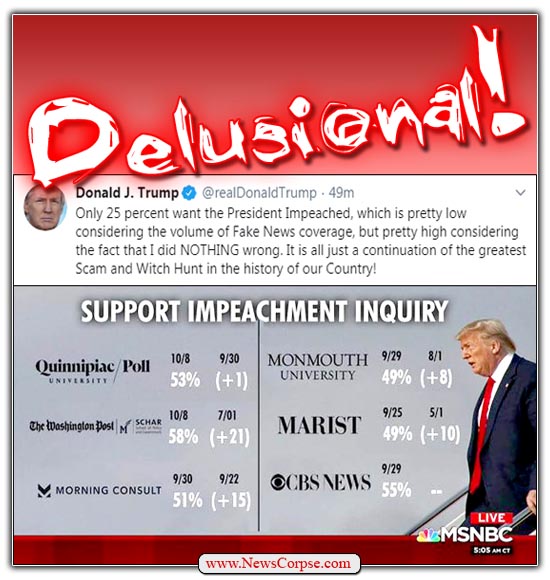 At this point Trump is running out of options. He later tweeted his thanks to an aspiring, but lame, Fox News wannabe, One America News Network (OANN). And he has recently taken to posting the results of ridiculous online polls at Breitbart. The depth of the desperation he must be suffering is almost painful to imagine. But it explains his sign off in the tweet above where he woefully salves his wounded ego with the consolation that “Oh well, I’m President!” That’s miserably sad on so many levels.