We haven’t heard from ultra right-wing video mangler and truth distorter, James O’Keefe, for quite a while. There’s a good reason for that. He has been busy slapping together bullshit “exposés” that no one with a functioning brain has had any interest in watching. This ethically-challenged slime merchant has done a pretty darn good job of making himself a laughing stock and an irrelevant never-was. 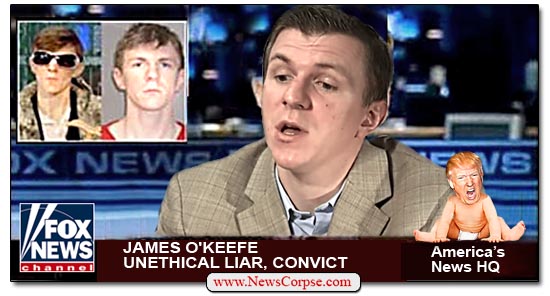 That said, O’Keefe just released his latest effort at maligning the media. But all he’s accomplished is to prove just how persistently stupid he is. In this episode O’Keefe purports to have planted a mole inside CNN with the intention of collecting damning video with which to slander the network. Unfortunately for the would-be news stalkers, all they collected was stale opinions of a few malcontents and some fairly routine remarks by Jeff Zucker, Chairman of CNN parent WarnerMedia News and Sports.

In a short clip that was posted on Twitter, O’Keefe discovered the shocking revelation that Zucker wanted his newsroom to “stay very focused on impeachment.” OMG! So Zucker was instructing his team to pay close attention to the biggest political story in years. And O’Keefe thinks that’s scandalous.

O’Keefe also showed video of a couple of low-level CNN employees privately expressing personal anti-Trump views. Which means that they’re aligned with the majority of the American people. They were not giving these views on the air and they had no authority whatsoever to direct news reporting. But O’Keefe wants people to believe that they represent CNN and that there aren’t any pro-Trump staffers at the network. Of course, that’s absurd. O’Keefe just edits out anyone who doesn’t advance his phony narrative.

As evidence of that, a sliver of reality managed to stick to O’Keefe’s video, contradicting his whole premise. He recorded Zucker saying that he knows that the network employs “a lot of people that are friendly with Lindsey Graham.” Exactly! They are some of the pro-Trump staffers that O’Keefe is exicising from his propaganda piece. And all Zucker said about that was that CNN reporters shouldn’t be “friendly” with Graham. Which, of course, is the ethical position for journalists to take with their subjects. So O’Keefe is actually accusing Zucker of being ethical.

The jewel of this clip appears to be a segment wherein O’Keefe’s mole clandestinely recorded Zucker making statements that O’Keefe seems think are controversial. Well, we report, you decide (video below):

Zucker: I think what’s going on in America right now is really fundamentally the result of years of fake news, conspiracy nonsense from Fox News. … The fake conspiracy nonsense that Fox has spread for years is now deeply embedded in American society. And frankly, that is beyond destructive for America, and I do not think we should be scared to say so.

The HORROR! Zucker articulated out loud a truth that every rational, objective American already knows. Fox News is a deceitful, dishonest, biased, purveyor of manufactured propaganda on behalf of Trump and the Republican Nationalist Party. And the lies that Fox disseminates promote ignorance and division. This is what O’Keefe believes constitutes hard-hitting investigative journalism.

O’Keefe pretends to be a “guerilla” journalist who is only interested in media fairness and transparency. However, his own exploits have been heavily weighted to conservative politics and conspiracy theories. He was arrested and convicted of unlawful entry into a U.S. senator’s office. He was also caught trying and failing to “seduce” a CNN reporter. He also lost a $100,000 lawsuit for libel. This is the character of the guy assaulting CNN’s reputation.

And THIS JUST IN: Trump tweeted about O’Keefe’s bogus Veritas project. Because it’s also the character of our Dumbass-in-Chief.

Naturally Trump heard about it from Tucker Carlson of Fox News who cast CNN as “State Media.” Which is weird since they’re asserting that CNN is against the current State of Trump. What’s more, Carlson made the hilariously incredulous comment that “As of Monday night, we have not independently verified the [O’Keefe] tape … But we have no reason to believe any of this is fake.” Really? No reason other than O’Keefe’s many years of being caught lying? Also, Trump’s speculation about suing (for what, exercising First Amendment rights?) follows on his asinine talk of suing Nancy Pelosi for doing her job as House Speaker.

It’s funny though, while O’Keefe, sees himself as a media crusader, he never goes after Fox News where their “reporters” feign objectivity while blatantly sucking up to Trump. Why hasn’t O’Keefe done anything about Trump’s Attorney Genuflector, William Barr, meeting privately with Fox boss Rupert Murdoch? Why hasn’t he reported that Trump himself called Fox News CEO Suzanne Scott to bitch about their coverage of him? Maybe because O’Keefe is a fraud and a failure who is destined to be ridiculed for exposing nothing but his own impotent hackery.

The full 19 minute video is available for anyone with the stomach to sit through it.

Wow, you found out that Jeff Zucker isn't a fan of Fox News…which is something he's publicly made clear for years now. https://t.co/jkRSlUGeDx