The pressure is on at the White House as evidence incriminating Donald Trump continues to pile up. The impeachment inquiry is entering a new, more public phase that is exposing facts that are unarguably tying Trump and his cohorts to unlawful activities. And it’s causing him to lash out in ever more incoherent ways. Even his support among Republicans has begun a disastrous freefall. 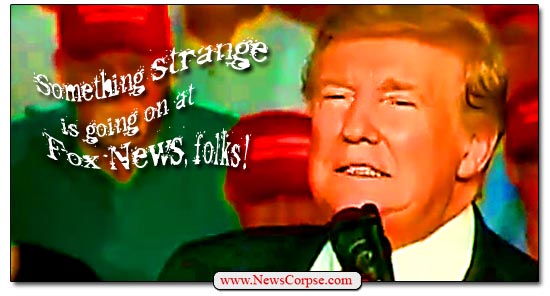 Of course, whatever affects Trump also has a symbiotic reaction at the Fox News Channel, the network whose mission is to protect and defend Trump and the conservative wackosphere from all enemies, foreign and domesticated. But the weight of the pressure currently being applied by Congress and the Constitution may be overwhelming Fox’s capacity to respond as programmed. This is creating some bizarre departures from their expected behaviors.

On Wednesday morning, the day after Trump’s Republican Nationalist Party suffered severe electoral defeats in Kentucky and Virginia, the “Curvy Couch” potatoes of Fox and Friends engaged in an exchange that began uneventfully with a typically pro-GOP tirade by Ainsley Earhardt. However, it quickly veered off into something that was uncharacteristically (gasp) liberal! It went something like this (video below):

Earhardt: I don’t understand how that message … how she [Elizabeth Warren] is doing so well with that message. That message is saying “You have more than I do. I’m jealous of yours. I wanna take some of what you have.”
Steve Doocy: But if you don’t have anything, that’s a very potent message, believe me.
Earhardt: But that’s not the American way. The American way is to work your tail off. Keep working. Say yes, say yes. Work weekends, work nights, work your way to the top.
Doocy: I get that. But if you have worked really hard and you still don’t have anything … I mean, I’ve been to the Bernie Sanders rallies where there are a lot of people who need help. You know, they didn’t have health care. They have problems with college tuition. And things like that. So for the Democratic message … “Look, you don’t have anything. The government is going to make sure that the most successful people pay extra so you can get a hand up.” That is very powerful. That’s why you look at the number of people with that point of view, you add up all the people that support that, it’s a big number.

WOW! Doocy gave a pretty good summation of Democratic principles that favor providing for the basic needs of all Americans. He seemed to recognized the appeal of programs that insure that no American goes hungry, or is unable to get medical care, or is burdened by undue debts for education, in the richest nation in the world. He even acknowledged that those benefiting from such programs do work hard and are not shiftless layabouts seeking to take advantage of the system.

The people Doocy is talking about are indeed a large group. And their numbers grow exponentially by adding their families, friends, and other compassionate citizens, who care about the less fortunate among us. They are also many of the same people that Trump tries to attract. He calls them the “forgotten Americans,” and they populate his cult rallies. However, the difference between the Democratic solutions and Trump’s is that Democrats think the wealthy should pay more to fill the gap, as Doocy noted, Meanwhile, Trump and the GOP think the wealthy should pay less (in taxes), and the poor should pay more, by giving up benefits like food stamps, housing assistance, college loan aid, and access to health care.

To be sure, whatever caused that glitch in the Fox News system that resulted in them going haywire with concern for others, it will be temporary. Rest assured that there are already people huddling in the executive suites plotting how to correct the malfunction. But in the meantime it was interesting to hear a perspective on the network that wasn’t dripping with rancor, racism, and animosity toward Americans who need a little bit of help from time to time. So enjoy it while it lasts, but don’t get used to it.

Ainsley Earhardt: "I don't understand how [Warren]'s doing so well" with a message of fighting income inequality, because "that's not the American way! The American way is to work your tail off! Keep working, say yes, say yes, work weekends, work nights, work your way to the top" pic.twitter.com/e6kZnWCacj

5 thoughts on “Fox and Friends Makes a Damn Good Argument to Vote for Democrats – No, Really!”