While it seems like this could be said about pretty much every week lately, this past week was one of the worst for Donald Trump. Bob Woodward’s new book, Rage, exposed Trump for having known just how deadly the coronavirus is, but lying about it to the American people. An article in The Atlantic revealed Trump’s disregard for America’s war dead as “losers” and “suckers.” And his polling versus Joe Biden continues to decline, as does his fundraising. 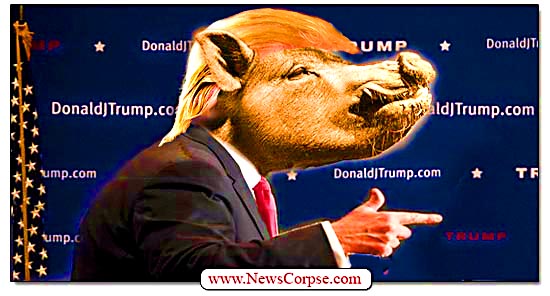 So what is a perpetually unpopular president (he’s never hit 50%) do to turn around his floundering campaign? In Trump’s case he resorts to moldy complaints about having been impeached due to an imaginary “witch hunt” and whining about his perceived persecutors:

….It has now been determined that the Mueller Scam should never have been set up in the first place, there were no grounds. It was all an illegitimate Witch Hunt, & a big price must be paid. How different my life would have been if this fraud on America was never committed!!!

When Trump says that “now we find out” something, he means that he just finished watching Sean Hannity on Fox News. Indeed, on Hannity’s Friday night program he discussed the “wiping” of phones with Trump’s press secretary, Kayleigh McEnany (video below). “Now we learn what Mueller’s team was doing,” McEnany lied. “Several dozens – think about that – several dozens of devices returned damaged, wiped clean, some of them intentionally so.”

What Trump and McEnany are too ignorant to know (or too dishonest to admit) is that the federal government requires that phones and other electronic devices used by those with access to confidential and classified materials be either thoroughly cleansed of the data, or physically destroyed. A State Department official addressed this issue with regard to Hillary Clinton’s phones. He told WIRED magazine in 2016 that…

“‘…department security policies mandate that all electronic devices are cleared of sensitive or classified information prior to reuse or disposal.’ Some devices are wiped and reused, in other words, while others are destroyed as part of the recycling process.”

So the shock expressed by McEnany, Hannity, and Trump is really just confirmation of how woefully ill-equipped they are to do their jobs.

But Trump had only just begun to deceive. He went on to characterize the Mueller Report as a “scam,” saying that that “has now been determined.” Notice that he doesn’t say who or what determined it. That’s because he’s making it up. In fact, the Department of Justice Inspector General, Michael Horowitz, found that the investigation was proper and was not motivated by political bias. Furthermore, the Republican-run Senate Intelligence Committee concluded pretty much the same thing.

All of this proves that Trump’s petulant whimpering and victimhood are the product of a weak and frightened man who is conscious of his guilt. And his plaintive yearning for a different life are really just the regrets of an inept criminal who is upset at having been caught.

.@PressSec seems VERY upset that people who worked on a sensitive investigation would, at the conclusion of that investigation, ensured that their issued phones did not contain any confidential data before handing them over to whatever random IT/HR people collected them. pic.twitter.com/1Cxu5Vyec1