With less than a week to go before election day, and Trump’s prospects trending worse by the day, his desperation is becoming ever more apparent and bizarre. He’s complaining about “COVID, COVID, COVID” getting more press than he does. And he’s pushing ludicrous and unfounded conspiracy theories (with the help of Fox News). 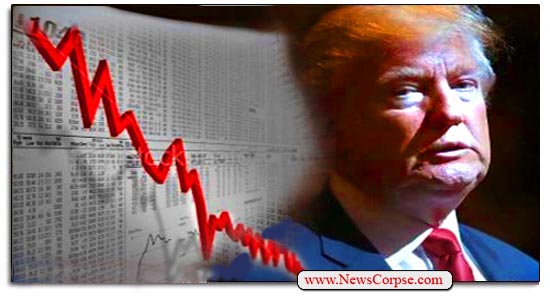 Trump’s arm must be getting sore as he stretches to grasp any bit of support he can cling to. In the process he’s actually alienating more voters than he’s attracting. That’s what happens when you brag about only losing 780,000 jobs in a week, or telling his female rally attendees that he will “get your husbands back to work.” And it doesn’t help that Trump thinks the new Gross Domestic Product (GDP) report is good news:

GDP number just announced. Biggest and Best in the History of our Country, and not even close. Next year will be FANTASTIC!!! However, Sleepy Joe Biden and his proposed record setting tax increase, would kill it all. So glad this great GDP number came out before November 3rd.

Trump is actually right that the number is one of the biggest ever reported. But that’s only because he has also presided over the worst numbers ever reported. In fact, the 7.4% (33% annualized) gain is less than the 36% decline that preceded it. So we are actually performing worse economically than we were before the coronavirus hit. If you score five runs in the ninth inning, that’s a pretty good inning. But if you gave up ten runs in the eighth, you’re still going to lose the game. For some reason, Trump failed to mention that in his tweet.

In the same tweet, however, Trump also failed to tell the truth (surprise) about Joe Biden’s tax plan. It is hardly “record setting.” It doesn’t even completely reverse Trump’s Tax Scam for Rich. But it does restore some measure of fairness.

It’s also interesting that Trump says that he’s “glad this great GDP number came out before November 3rd.” Notice that he isn’t glad the number was positive. He isn’t glad that it may be an indicator of some economic relief for the long suffering American people that his negligence and incompetence have hurt so badly. He’s only glad that it came out in time to possibly help him get reelected. Although it is likely too late for that, it shows where his priorities are.

For the record, the nation is still in recession. There are still record numbers of people unemployed, and many of those job losses are permanent. Small businesses and farms have gone bankrupt. Savings for seniors and others on fixed incomes are earning next to nothing on interest. Even worse, Trump is trying to terminate the Payroll tax that funds Social Security, which would bankrupt the program by 2023.

Trump likes to claim that he’s responsible for any gains in the stock market and that Biden would be a “disaster.” But not only is the stock market not representative of the broader economy, no president controls it. It’s a function of investors predicting how business will perform in the future.

However, to the extent that those predictions are based on policies put forward by a president, the market’s rise is actually a vote for Joe Biden. That is who Wall Street is anticipating will be president next year, and they regard that as a positive development for the economy. Which makes Trump’s assertion that “Next year will be FANTASTIC!!!” the only true comment in his tweet.