The rabidly partisan Fox News web site, Fox Nation, has revealed what they regard as the most terrifying foe in the political universe. They posted an article that makes it clear what is keeping them up nights: Media Matters Spawn Trailing G.O.P. With Cameras.

The headline references an article in the New York Times about American Bridge, an independent organization that documents public political events and candidates. It was founded by David Brock, founder of Media Matters. However, that brief headline is dripping with references to Fox’s spine-chilling horror.

First, and foremost, is the frightful Media Matters. Fox News is so petrified of this little, non-profit, media watchdog, that they are presently engaged in a weeks-long effort to shut it down by challenging their tax-exempt status. They have committed dozens of stories and personnel to the campaign that includes direct appeals to file complaints with the IRS.

The other cause of their dread is the notion that Republican candidates might be recorded by (cue scary music) CAMERAS! That’s right, the most frightening prospect facing any Republican is that of being captured actually saying things to citizens. It sends them into seizures of anxiety and wails of gotcha-ism. The last thing a Republican wants is to be held accountable for what they actually say.

Recent examples of why they are so apprehensive include, Michele Bachmann’s stated affinity for serial killer John Wayne Gacy; Mitt Romney’s sequence of contradictory assertions that President Obama made the economy worse, which he later denied saying, then later said it again; Herman Cain’s remarks that Obama is not really black; Newt Gingrich slamming Paul Ryan’s GOP budget as “right-wing social engineering.” 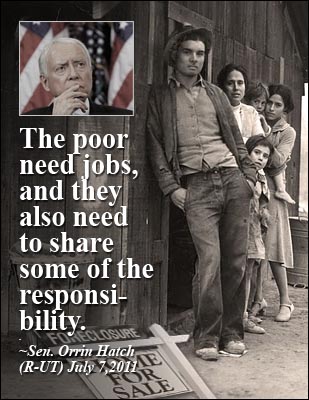 This week in the senate, Orrin Hatch (R-UT) spoke about the sputtering economy and his opposition to the wealthy sharing in the sacrifice required to get the country back on track. He began by saying that…

“Shared sacrifice is something – sounds good – but I’d prefer the Republican approach to shared prosperity.”

What does that even mean? Have the uber-rich been sharing their prosperity without my noticing (or getting any)? But Hatch wasn’t through embarrassing himself with how pitifully out-of-touch and insensitive he is. He continued his speech to note that…

“The poor need jobs, and they also need to share some of the responsibility.”

Of course. Because the poor have not suffered enough. While the top 1% of earners have seen their fortunes increase and their taxes decline, the poor have been living it up at soup kitchens and unemployment offices. In a nation where the 400 richest individuals have more wealth than the 150 million at the bottom combined (half of the nation’s population), it is the poor who have not taken up enough of the burden. And the rallying cry of the GOP is that cuts must be made; cuts to Social Security; cuts to pensions; cuts to worker’s compensation; and of course, cuts to taxes for the rich – again. There’s your shared sacrifice GOP style:

It’s that sort of rhetoric that the GOP is afraid will be distributed to voters. And their hypocrisy only compounds the problem. That’s why American Bridge – or any citizen with a cell phone – will always be regarded as a threat by Republicans. They simply can’t handle the truth. That’s why they created Fox News.

4 thoughts on “What Fox News And Republicans Fear Most”