The nauseating tale of the Republican’s QAnon congresswoman, Marjorie Taylor Greene, just keeps descending into an ever-deepening abyss of muck. But it’s not bad enough that we have a GOP representative who believes that 9/11 was an inside job; that the mass murder of children was staged; and that Democrats are sex-trafficking baby-eaters, We also have a national “news” network that backs her up. 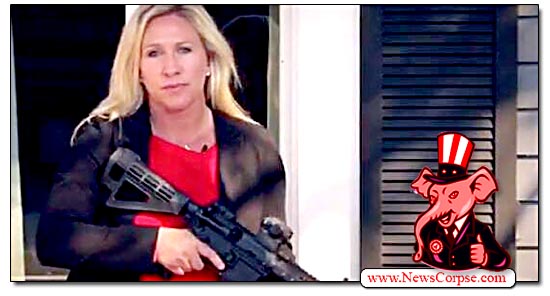 This week Tucker Carlson devoted a segment of his White Nationalist Power Hour on Fox to defending Greene. And on Wednesday morning Fox continued the Greene-boosting campaign with an interview of GOP Whip, Steve Scalise (video below). Host Harris Faulkner led off the segment with a shamelessly leading question that mangled reality:

First of all, Democrats are not seeking to strip Greene of her committee assignments merely because she believes some insane, nonsensical, conspiracy theories. Although that would be sufficient reason by itself. The bigger problem is that Greene has also advocated assassinating members of Congress, including Democratic leaders like Speaker Nancy Pelosi. How could anyone not regard that as good cause to not only bump Greene from committees, but to expel her from Congress?

Faulkner went on to provide Scalise with an answer to her question by making an absurd connection between Greene’s homicidal raving and some awkward remarks by Rep. Ilhan Omar. Never mind that Omar clarified her original, benign intent, while Greene stubbornly stands by her inflammatory madness that included inciting Trump’s deadly Capitol insurrection. The answer was to evade criticism of Greene by pointing fingers at Omar.

Faulkner failed to mention that both Democrats and Republicans also deemed Greene’s comments offensive. In fact, Senate GOP leader Mitch McConnell said that her “loony lies and conspiracy theories are a cancer for the Republican Party and our country.” And Scalise took the bait:

“The Democrats actually have the authority to remove Marjorie Taylor Greene from her committees, but we’re talking about statements that were made before she was even a candidate for Congress. And that, I think, has some bearing here.”

How does Greene having made her remarks before being elected to Congress have any bearing? Does Scalise really think it’s okay to threaten to murder members of Congress so long as your aren’t a member yourself at the time of the threat? That would mean if someone threatened to murder him today, then later get elected to Congress, he’d be cool with that.

Scalise went on to draw fatuous equivalencies between Greene and what he called “a whole plethora of folks” (Ilhan Omar, Nancy Pelosi, Maxine Waters, Ayanna Pressley), who he said “made offensive or dangerous statements,” and that “We’re really trying to say ‘What’s good for the goose is good for the gander.'” But none of that “plethora” ever advocated violence or spread crazy lies about satanic cult-worshipping Republicans.

It’s interesting to note that Scalise’s argument doesn’t actually defend Greene. He’s just saying – falsely – that Omar is just as bad. But even so, Scalise still won’t vote to remove Greene from her committee assignments, even though his “goose and gander” rhetoric seems to suggest that it’s warranted.

As for Fox News, they have whined incessantly about the fuss being made over Greene, a freshman back-bencher in congress. They apparently have forgotten about how they obsessed over Alexandria Ocasio-Cortez and other Democratic newcomers like Omar. They literally called AOC the face of the Democratic Party. Even worse, they demanded that Omar “go back to her country” (she is an American citizen).

In the meantime, Fox News has hardly mentioned Greene in the past month. Which is further proof that this whole charade is just another attempt by Fox News to muddy the waters and allow a cretinous slimeball to get away with her toxic hate speech. It’s the Fox Way.

Fox News is all in today on pushing a false equivalency between Ilhan Omar and Marjorie Taylor Greene pic.twitter.com/7ogEbBzl3t