America’s first (and hopefully only) reality TV game show host to have accidentally become president of the United States has provided the finishing touch to his career as a failed entertainer. And true to form, Donald Trump has made the whole affair about himself and his morbidly bloated ego. Now he has been wounded in way that is especially painful for someone so obsessed with himself. 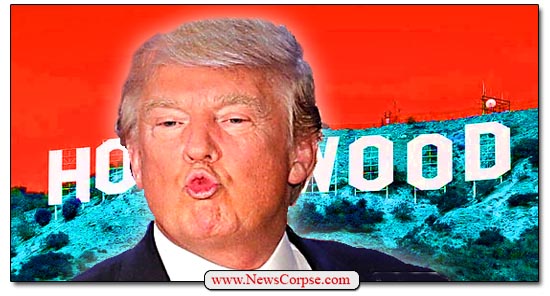 Prior to launching his brand marketing scheme disguised as a presidential campaign, Trump was the villainous figure who arrived at the end of The Apprentice to fire some poor schnook like Gary Busey or Meatloaf because they couldn’t manage to set up a lemonade stand. Trump’s presence on the program required him to join the Screen Actos Guild (SAG-AFTRA). However, after his disastrous presidency – and particularly his responsibility for the deadly Capitol insurrection – the Guild took steps to expel Trump. Guild leaders issued these statements:

SAG President Gabrielle Carteris: “Donald Trump attacked the values that this union holds most sacred – democracy, truth, respect for our fellow Americans of all races and faiths, and the sanctity of the free press. There’s a straight line from his wanton disregard for the truth to the attacks on journalists perpetrated by his followers.”

SAG-AFTRA National Executive Director David White: “Our most important role as a union is the protection of our members. The unfortunate truth is, this individual’s words and actions over the past four years have presented actual harm to our broadcast journalist members. The board’s resolution addresses this effort to undermine freedom of the press and reaffirms the principles on which our democratic society rests, and which we must all work to protect and preserve.”

Naturally, Trump couldn’t keep his malignantly narcissistic yap shut. He hasn’t made a single public comment since being banished to Mar-a-Lago by the American people. He’s said nothing about his Seditionist Brigades in Washington or the the murder of a Capitol Hill Police officer. But he nevertheless felt compelled to announce to the world that “I no longer wish to be associated with your union,” which he baselessly accused of “promoting dangerous un-American policies and ideas.”

So after the Guild had already made clear its intention to kick Trump out, he penned a poison letter that is pure Trumpian egomania…

Trump's letter whining and resigning from the Screen Actor's Guild after they already drafted a resolution to expel him. ??? pic.twitter.com/T2xREAIv44

The letter is rife with the conceit that is the hallmark of Trump’s character, or lack thereof. He could not stop talking about himself and what he regards as his invaluable contributions to human existence. For instance…

“I write to you today regarding the so-called Disciplinary Committee hearing aimed at revoking my union membership. Who cares!”

” While I’m not familiar with your work, I’m very proud of my work.”

“I’ve also also greatly helped the cable news television business (said to be a dying platform with not much time left until I got involved in politics), and created thousands of jobs at networks such as MSDNC and Fake News CNN, among many others.”

For the record, cable news was a growing media phenomenon prior to and during the Trump presidency. What’s more, the ratings for both MSNBC and CNN have skyrocketed since Trump lost decisively to Joe Biden, who has has already articulated his aversion to Fox’s propaganda and lies. And Fox News has dropped to third place for the first time in twenty years.

If Trump wants to take credit for something, that would be it. He has managed to succeed at something progressive media activists have struggled with for years. He made Fox News as toxic as he is. The result is that Fox is turning even harder toward the loony right. Which will likely ensure and accelerate their descent into the ratings abyss. Thanks Donnie!

3 thoughts on “Crybaby Trump to Screen Actors Guild: You Can’t Fire Me. I Quit!”