There aren’t many Republican officeholders who are more shamelessly devoted to Donald Trump than Lindsey Graham. His devotion borders on the blind adoration of a cult follower. He defends every idiotic thing Trump does and says. He salivates at the chance to spend time with Trump at his resort or on the golf course. And now he has confessed out loud his belief that the Republican Party cannot exist without Dear Leader Trump. 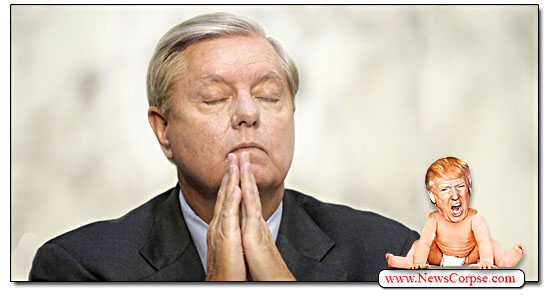 Graham made a pilgrimage to the GOP media Mecca (aka Fox News) on Thursday for a prayer meeting with fellow Trump cultist, Sean Hannity. While there, Graham testified as to the salvation he has received through the grace of Trump:

For the record, in four years Trump presided over the loss of the House, the Senate, and the White House to Democrats. He never had an approval rating that hit 50 percent. He lost the popular vote twice. He was impeached twice and both times polls showed that a majority of the people favored his impeachment. He is the first president in decades to leave office with fewer people employed than when he started. He exploded the national debt by cutting taxes for corporations and the wealthy. He advanced the nuclear aspirations of both Iran and North Korea. He withdrew the U.S. from the international Paris Climate Change Accords. [Inhale…]

[And exhale…] What’s more, Trump incited deadly riots in Washington, D.C. by insurrectionist mobs. He continues to push his “Big Lie” that the election was stolen from him, which is likely to foment more violence. And worst of all, his negligent and incompetent mishandling of the COVID pandemic resulted in the deaths of more than half a million Americans.

That’s the record that led Lindsey Graham to the determination that the Republican Party can’t grow without Trump. No, really. That’s it!

This is the same Graham who, before his epiphany, described Trump as a “kook” who is “crazy” and “unfit for office.” It’s the same Graham who later sought to “harness the magic” of Trump. Needless to say, a sane person would come to an entirely different determination. A sane person would recognize that Trump is a dead weight that is sowing division and hostility through his lies and a cult-like demand for loyalty and unwavering obedience.

What Graham thinks is attracting people to the Republican Party is actually just attracting desperate and frightened party shills to the cult, while simultaneously “canceling” apostates like Liz Cheney and Mitt Romney who dare to tell the obvious truth that Biden beat Trump. The American people are not fooled by this. And the more that Trump is embraced by GOP lackeys like Graham, the better it will be for Democrats.

4 thoughts on “SALVATION: Lindsey Graham Accepts Trump as His Political Lord and Savior”