The political debate in America has significantly devolved since Donald Trump rose to (and fell from) power. Trump’s idea of a substantive argument is to either fling infantile insults at his opponents, or to exalt himself for things he’s never done. And Fox News hasn’t helped with their manic promotion of trivial issues like the “cancelling” of Mr. Potato Head, or President Biden being responsible for a sauce shortage at Chick-fil-A. 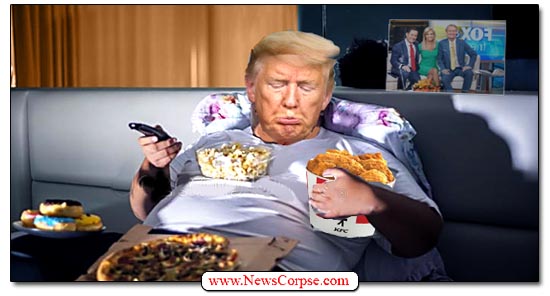 On Friday evening’s episode of Sean Hannity’s Fox News program, the House Republican minority leader, Kevin McCarthy, was interviewed along with the GOP Whip, Steve Scalise, and the newly installed GOP conference chair, Elise Stefanik. That trio at the top of the Republican food chain have the distinction of all having voted to overturn the election on behalf of their messiah Trump.

During the interview, Hannity sought to elicit some commentary from his guests that would cast Biden as unfit to serve. That led to this exchange with McCarthy:

Hannity: What observations did you see as it relates to the President? Did he seem engaged? Did he have a high level of energy? You’ve been around Donald Trump, you’ve been around Joe Biden. What’s the difference between the two men?
McCarthy: This is the first time I saw Joe Biden as President since he’d been – I saw him at inaugural and State of the Union night. He was with it, and he was engaging, and he was giving me numbers, and he was talking. But at no time, having known Joe Biden for quite some time, does he have the energy of Donald Trump. We both know it. Donald Trump didn’t need to sleep five hours a night.

"But at no time, having known Joe Biden for quite some time, does he have the energy of Donald Trump. We both know it. Donald Trump didn't need to sleep five hours a night" — Kevin McCarthy to Hannity pic.twitter.com/LKSKLUoC8E

Hannity must have been bitterly disappointed that McCarthy acknowledged Biden’s engagement and grasp of detail. Hannity has been trying in vain to portray Biden as “weak, frail, and struggling cognitively.” But McCarthy’s response failed on multiple levels.

First of all, the assertion that Trump was bursting with energy is contradicted by four years of unprecedented presidential sloth. Trump didn’t begin his work day until 11:00am. He refused to sit through daily briefings. He insisted on what his staff called “executive time,” that consisted primarily of tweeting and watching Fox News. And he has spent a record amount of time on the golf course (usually at his own properties) that accounts for upwards of 20% of his time in office. And who can count the wasted hours Trump spent performing his psycho-comedy routine for the cultish followers at his campaign rallies?

What’s more, McCarthy’s admiration of Trump’s “wokeness” is a peculiar argument. Lack of sleep is not an indicator of strength. It’s an illness with severe consequences. Sleep deprivation diminishes mental acuity, produces hallucinations, and causes anxiety and psychoses. There’s a reason that it’s often used as a form of torture. So no one should be impressed that Trump doesn’t get sufficient sleep. And if Trump is suffering from insomnia, it would interesting to know what’s causing it. Some common causes are anxiety, stress, depression, and medications such as Adderall.

America can rest comfortably knowing the President is getting sufficient sleep to competently do his job. But we still have to worry about the fact that the hopelessly lost Republican Party is controlled by “Sleepy Don” and the “Big Lie” spreaders at the top of the GOP pile. Then again, that may be the best thing that can happen for Democrats.