During these turbulent times in a divided America it’s useful to recall the old and inspirational saying that “When the going gets tough, the tough chow down on fast food chicken.” At least that would be the version of it told by Republican senator and Donald Trump lapdog, Lindsey Graham. 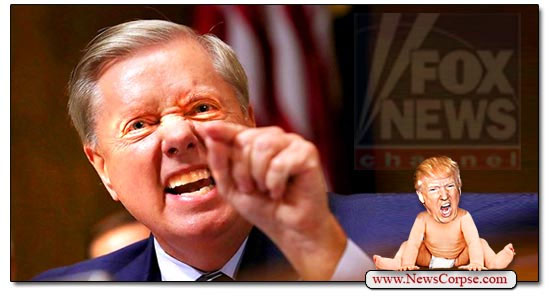 With the fowl stench of war permeating Washington, Graham has courageously taken sides in the nation’s most contentious battle. As reported by Fox News, Notre Dame University has erupted into a bitter culture clash that threatens to tear at America’s core:

“A group of students and faculty at an elite Catholic university say they don’t want Chick-fil-A to open a restaurant on their Indiana campus because of the restaurant chain’s frequent donations to Christian groups.

“Roughly 180 University of Notre Dame students and faculty have signed an open letter calling on the school’s Campus Dining division to nix the proposed new shop.”

Fox News isn’t being entirely honest, as usual. If the problem were merely funding for Christian organizations, no one at Notre Dame, a private Catholic institution, would care. But citing the complaint as “donations to Christian groups” is a euphemistic way of disguising the fact that those donations are actually going to openly homophobic hate groups that actively campaign against LGBTQ rights.

Upon learning of the actions taken to deny Chick-fil-A a place on campus, Graham rushed to the front lines to declare that “I want everyone in South Carolina and across America to know I have Chick fil-A’s back. I hope we don’t have to, but I will go to war for the principles Chick fil-A stands for.”

I want everyone in South Carolina and across America to know I have Chick fil-A’s back.

I hope we don’t have to, but I will go to war for the principles Chick fil-A stands for.

Well, isn’t that special? Graham wouldn’t go to war in defense of the Capitol Police who were attacked by Donald Trump’s insurrectionists. Nor would he go to war to fight for a congressional committee to investigate the January 6th right-wing riots. He declined to fight for voting rights that his party is suppressing across the country. And he failed to hold Trump accountable during both of his impeachment trials.

In fact, few have been more subservient to Trump than Sen. Graham. He insists that “the Republican Party can’t grow” without Trump. He says that he wants to “harness the magic” of Trump’s “movement,” while ignoring his “dark side.” He has steadfastly remained joined at the lip to Trump despite Trump’s reckless incitements to violence, his seditious promulgation of the “Big Lie” that the election was stolen from him, and his responsibility for the deaths of more than 600,000 Americans due his negligent and incompetent mismanagement of the COVID pandemic.

However, Graham is now aligning himself with the QAnon caucus of the GOP. Earlier this year Rep. Lauren Boebert, along with Ted Cruz, Fox News, and others, blamed President Biden for a sauce shortage at Chick-fil-A. That may have been the opening salvo in the war that Graham is enlisting for now.

Graham’s South Carolina constituents are surely going to appreciate his determination to fight to the death on behalf of a fast food chain based in Georgia that is seeking to peddle their chicken parts at a university in Indiana. And he’s willing to make this sacrifice to the exclusion of every other crisis that America is facing. It is, after all, the only cause that he has promised to “go to war” over. Such are his priorities: Trump and Chicken.

3 thoughts on “Chicken-Hearted Lindsey Graham Says ‘I Will Go to War for the Principles of…’ Chick fil-A?”