Seven months ago Twitter belatedly banished the account of Donald Trump as he was promulgating blatant lies about election fraud and whipping up his cult disciples into savage mobs bent on sedition. Twitter imposed the ban on January 8th, two days after Trump’s deadly insurrection on Capitol Hill, saying that “we have permanently suspended the account due to the risk of further incitement of violence.” 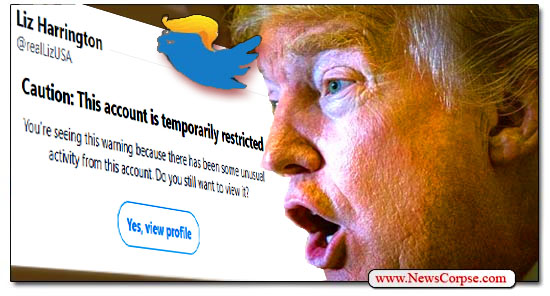 In the seven months since his suspension Trump has actually escalated his reckless rhetoric. Trump continued to make purposefully inflammatory comments online and at his cult rallies (where he sometimes does himself more harm than good). Although he has managed to maintain an online presence despite his exile from Twitter (and YouTube and Facebook), much of it has demonstrated his infamous capacity for failure. For instance, his attempt to launch an online blog was shut down in less than a month.

However, none of that deterred Trump from pursuing his aspirations of messianic tyranny. Aiding and abetting this nightmarish goal was his new spokeswoman, Liz Harrington. As soon as she came aboard she began posting tweets that were nothing more than cut-and-paste Trumpisms that he was tweeting himself prior to his exile from social media. It was a brazen attempt to circumvent the Twitter ban, which is a violation of their terms of service.

In the month of July Harrington was Trump’s Twitter proxy more than 80 times. By allowing this, Twitter was itself helping Trump to continue disseminating his crackpot conspiracy theories that had already fomented a deadly riot and the first assault on the U.S. Congress in America’s history.

Now there appears to be at least a temporary relief from the Trumpist propaganda peddled by Harrington. On Friday morning anyone vising her Twitter account received a message saying…

“Caution: This account is temporarily restricted. You’re seeing this warning because there has been some unusual activity from this account. Do you still want to view it?”

It’s not clear what Twitter is referring to as the “unusual activity.” Neither is it clear how long the restriction will remain in place. It could be revoked within minutes or months. But it is a step in the right direction. And it validates all of the efforts by innumerable Twitter users who reported Harrington for violating Twitter’s rules.

This, however, is not the time to declare victory and withdraw. Since the account is still technically accessible, it is imperative that people continue to report it. Harrington should be suspended permanently for her repeated breaches that have allowed Trump to continue provoking potentially violent behavior. He is a clear and present danger to the nation, and Harrington (and Twitter) must not be permitted to assist him in his treasonous pursuits.

UPDATE: The restriction lasted less than 24 hours, and Harrington is back to posting Trump’s alt-tweets. So apparently Twitter still doesn’t care if their rules are violated by Trump and his confederates in ways that will surely incite further violence.