President Biden has been taking considerable heat on his handling of the Afghanistan war winddown. Despite the unprecedented airlift that has evacuated more than 100,000 people in less than a month, and having to navigate the traps that Donald Trump left for him, the President has still had to weather unduly harsh criticism from politicians and pundits. 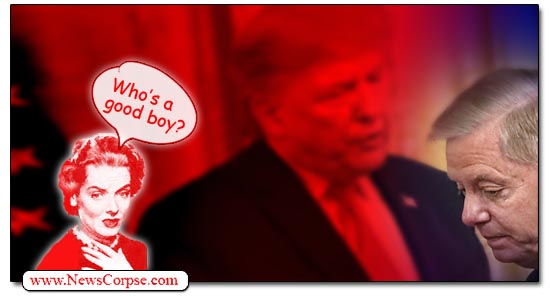 Fox News predictably takes the lead among pundits taking aim at Biden. However, on Sunday morning CBS took a turn with an interview of GOP Senator Lindsey Graham. Ed O’Keefe hosting Face the Nation asked Graham what consequences Biden should face for his decisions about leaving Afghanistan. Graham responded with a bizarre question of his own, asking “Whose decision was it to pull all the troops out?”

That, of course, was a decision made in what Trump’s own National Security Advisor called a “surrender agreement“ between Trump and the Taliban for an unrealistic May 2021 withdrawal. Biden put it off until August 31. But Graham wasn’t through lobbing mud at his former friend:

“I think he should be facing a lot of consequences here … Joe Biden’s fingerprints are all over this. He’s created the conditions for ISIS to flourish in Afghanistan. They doubled the number of troops available because of the jail break. A terrorist group called the Taliban is now in charge of the country. … He deserves a lot of accountability for this, and I’m sure it will be coming.”

“Joe Biden’s fingerprints are all over this,” Sen. Graham (R-SC) says, arguing the president “deserves a lot of accountability for this”: “He’s created the conditions for ISIS to flourish in Afghanistan. They have doubled the number of troops available because of the jail break.” pic.twitter.com/9dn88YQ8UX

Graham got literally everything wrong in that brief commentary. To begin with, he didn’t bother to explain how Biden “created the conditions for ISIS to flourish,” and O’Keefe didn’t bother to follow up. More objective observers would note that it was Trump’s abysmal deal with the Taliban that set the stage for more terrorist activity. That deal called for the release of 5,000 Taliban fighters. It also lifted all sanctions on the terrorist group. And it set a date certain for the exit of American and allied troops.

Graham’s complaint that a jailbreak “doubled the number of troops” was peculiar, because the jailbreak to which he is referring occurred on August 2, 2020, under Trump’s watch. So that’s just more evidence that it was Trump who bears the responsibility for the ordeals that followed. O’Keefe let that slide as well.

Graham closes by stating the obvious that “the Taliban is now in charge.” Of course that’s only because Trump negotiated that outcome when he excluded Afghan leaders from the talks that resulted in the U.S. withdrawal. By doing so he further delegitimized their government and guaranteed that they would have no role in the country’s future.

Those are the decisions that made the conditions in Afghanistan far more favorable for the terrorists. They all emanated from Graham’s Dear Leader Trump. Nevertheless, Graham took this opportunity to call for Biden to be impeached, and not for the first time. Which only affirms that he is a brazenly political hack who couldn’t care less about facts as he stabs his former friend in the back. That in turn affirms the total absence of ethics on the part of Republican Party that Graham represents.