With the advent of the new, and potentially more dangerous, Omicron variant of the coronavirus, Republicans are ramping up their disinformation machine to either dismiss the threat as fake (which Fox News did on Saturday), or to blame the entire COVID pandemic on President Biden (which Trump and the Wall Street Journal did on Friday). 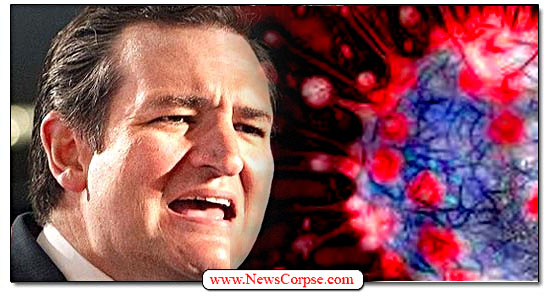 Among the most prominent anti-science crusaders on the right is Sen. Ted Cruz (R-Cancun). Cruz has taken a leading role in the vilification of America’s foremost epidemiologist, Dr. Anthony Fauci. On Saturday Cruz made a formal request (via tweet) asking the Attorney General to prosecute Dr. Fauci for lying to Congress, for which Cruz’s own basis is a lie. Dr. fauci was given an opportunity to respond to Cruz on Sunday’s edition of Face the Nation:

Host Margaret Brennan: Sen. Cruz told the Attorney General that you should be prosecuted.
Fauci: [Laughing] I have to laugh at that. I should be prosecuted? What happened on January 6, Senator?
Brennan: Do you think that this is about making you a scapegoat to deflect from president Trump?
Fauci: Of course. You’d have to be asleep not to figure that one out.
Brennan: Well, there are a lot of Republican senators taking aim at this.
Fauci: That’s okay. I’m just gonna do my job, and I’m gonna be saving lives, and they’re gonna be lying.

And on Republicans scapegoating him: "That's okay. I'm just gonna do my job, and I'm gonna be saving lives, and they're gonna be lying." pic.twitter.com/fJm1Hh8lSJ

Dr. Fauci was exhibiting his Brooklyn roots by slamming Cruz for his defense of the Trump-inspired insurrection on January 6th. Indeed, Cruz has declined all efforts to hold the StormTrumpers accountable for their seditious crimes. But more to the point, Dr. Fauci passionately stood up for science and the critical role it plays in protecting lives, saying that…

“Anybody who’s looking at this carefully realizes that there’s a distinct anti-science flavor to this. […] They’re really criticizing science. Because I represent science. That’s dangerous. To me that’s more dangerous than the slings and the arrows that get thrown at me. And if you damage science you are doing something very detrimental to society long after I leave.”

There is no doubt that the Republican aversion to science has made life more difficult. They have prolonged the pandemic and directly contributed to the suffering and loss of life that was otherwise preventable. And studies show that there is by far more COVID cases and fatalities in GOP dominated states and counties. Not surprisingly, those enhanced risks in red territory is linked directly to the disinformation put out by Fox News and other right-wing media.

It’s astonishing how the Trumpian right can hold views that are so diametrically opposed. They have asserted that the pandemic is fake. But if it isn’t fake, it’s no worse than the flu. But if it is worse, it can be cured by horse dewormer or bleach. But you don’t need a cure because it’s fake.

And all of this culminates in demands that experts like Dr. Fauci, who have spent their whole lives dedicated to saving the lives of others, be sent to prison for daring to disseminate science. That’s how far the right has fallen into the abyss of ignorance and willful blindness.

3 thoughts on “Dr. Fauci Laughs at Ted Cruz’s Call for Him to Be Prosecuted and Hits Back at Science Deniers”