At what point do we throw up our hands in the air and concede that Republicans are are just a perverse comedy troupe trying to punk America? Because that appears to be only way to make any rational sense of some (most) of the blitheringly idiotic things they do and say. 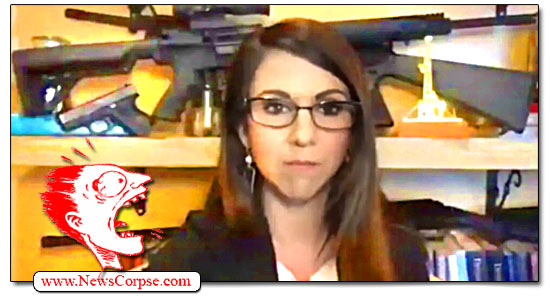 It would explain so much. It would explain how every Republican can get away with voting against the gouging of gas prices. It would explain how the GOP can vote against healthcare for veterans poisoned in the line line duty. It might even explain how a former reality TV game show host, who believes that windmills cause cancer and bleach injections cure COVID, came to occupy the White House, and still has supporters after being impeached twice and trying to overthrow the government.

RELATED: Trump Projects His Own Dementia on Biden in a Nauseating Mash Up of COVID and Election Fraud

The Republican Party is really giving Saturday Night Live some serious competition. And there could be no better example of that then what Rep. Lauren Boebert (CO-QAnon) said during an interview with former Trump flunky Sebastian Gorka on Newsmax Sunday night:

“If the citizenry of America is disarmed, then we are no longer citizens. We are subjects. You know, here in America we have gourmet treats for puppies. We have these amazing groomers for dogs. Well in Venezuela they eat the dogs. And it started because they don’t have firearms. They do not have a way to protect themselves, to defend themselves against a tyrannical government.

Lauren Boebert says if the assault weapons ban is passed, people in America will start eating their dogs because that’s what happened in Venezuela. pic.twitter.com/Wrxk14uIHD

Indeed. American citizenry is defined by each individual’s personal arsenal. And American democracy is admired around the world because it provides “gourmet treats for puppies,” just like it says in the Constitution. Never mind that Boebert is imagining a scenario wherein all Americans are disarmed., something no Democrat has ever suggested. Although, perhaps we shouldn’t dwell on Boebert’s affinity for “amazing groomers.”

The key point that this GOP member of Congress was intent on making was that America’s lax gun policies have kept the nation from consuming it’s canine friends. Having the freedom to own all manner of weaponry, even military assault rifles, is what separates us from the heathens in Venezuela.

Boebert doesn’t mince her words. She flatly states that the reason Venezuelans eat dogs is because “they don’t have firearms.” That’s true. After all, if the dogs had firearms they would mow us down in the street if we tried to approach them with steak knives and BBQ sauce.

It’s difficult to grasp how Boebert got from gun regulation to doggie dinners. But that’s because we don’t have the kind of twisted sense of humor that she does. It’s because we don’t ignore facts, such as that much of the Venezuelan population is so poor that often dogs are the only source of food available.

Boebert’s stab at comedy comes at time when actual comedians are taking more serious positions on matter of critical importance to the nation. Jon Stewart has been lobbying Congress to pass the veteran’s healthcare legislation that the Republicans have been voting against. And Stephan Colbert sent Triumph, the insult comic dog, a rubber puppet, to Capitol Hill to confront members about the January 6th insurrection that was incited by Donald Trump.

RELATED: Stephen Colbert Hysterically Mocks Tucker Carlson’s ‘Comedy’ on the Arrest of His Staff in D.C.

Triumph is lucky that the hungry Democrats in the House of Representatives didn’t tie him to a spit with an apple in his mouth. Although, it is important to note that Triumph managed to escape with his life even though he and his human handlers were all unarmed. And with no help from Boebert, either.