Tuesday’s primaries produced a mixed bag of results for both Democrats and Republicans. Some of Trump’s endorsed candidates succeeded in winning predictably Republican contests. But the headline victory went to the voters in Kansas who preserved the state constitution’s protection of privacy and the rights of access to abortion. 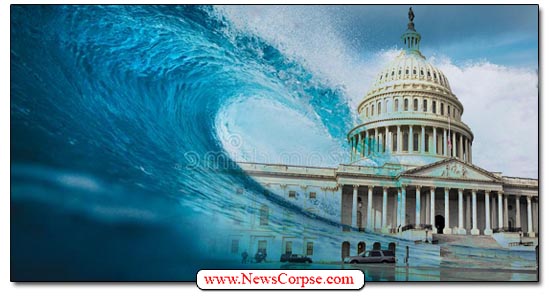 Despite the variances in the election results, Donald Trump demonstrated his dishonesty, willful ignorance, and political tunnel blindness, by asserting that the night was a total victory for him and MAGA. “Ran the Entire Board,” he posted on his miserably failing social media scam, TRUTH Social.

RELATED: Trump’s Twitter Ripoff (TRUTH Social) Has Lost 36% of its Value Since He Began Posting On It

That, of course, was a flagrant lie. In fact, two of the GOP representatives that Trump worked hardest to defeat – Jaime Herrera Beutler and Don Newhouse who both voted for his impeachment – won their primaries in Washington. And a third – Peter Meijer – lost by a hair to a Trump cultist who will almost certainly lose to his Democratic opponent in November in this newly blue Michigan district.

Given the overall results of these primaries, the political forecast for Democrats has greatly improved. And that did not go unnoticed by Rep. Eric Swalwell of California. Swalwell might have been endorsed by Trump when he posted a couple of days ago that a surname-less “ERIC has my Complete and Total Endorsement!” Following the reports of Tuesday’s primary results, Swalwell confidently tweeted that, “This is gonna be a wave election alright…a BLUE one!” And he retweeted a recent poll to back up his certainty:

This is gonna be a wave election alright…a BLUE one! https://t.co/qrOBdToZyi

This poll is a significant improvement over the one taken just a month ago that had the GOP ahead 48 to 46. And it isn’t hard to understand why the landscape changed so drastically. With the ultra-rightist Supreme Court delivering rulings that overturned Roe vs Wade, weakened voting rights, and permitted more widespread access to guns, the American people have been given some strong incentives to ditch Republicans at every level of government.

However, there are also positive incentives for voting Democratic. Despite a razor thin margin in Congress, President Biden and the Democrats have delivered a big basket of bills that are overwhelmingly popular. They include legislation on infrastructure, the American Rescue Plan, gun safety, semiconductor chip manufacturing, climate change, and veteran’s healthcare.

Along with those legislative achievements, the Biden administration also presided over the creation of nine million jobs, lowering unemployment to 3.6%, ending a 20 year war in Afghanistan, and more recently, terminating Al Qaeda leader, Ayman al-Zawahiri. These accomplishments are starting to be recognized by voters across the country and the political divide, despite efforts by Fox News News and other right-wing media to suppress them.

Democrats will need to overcome the historical tendency of the party in power losing control of Congress in the first midterm election. But there are definitely signs that that trend may be averted this year. However, it won’t happen without voters staying engaged and motivated to give their all to electing Democrats. And Republicans will surely be plotting more malicious means of stealing the election.

So while the future looks bright, it is our patriotic duty to keep the sun shining. And all indications point to the likelihood that, if we stay vigilant and committed, we will succeed in producing a massive blue wave in November.

3 thoughts on “Trump-Endorsed (?) Rep Eric Swalwell Says ‘This is Gonna Be a Wave Election Alright…A BLUE One!’”